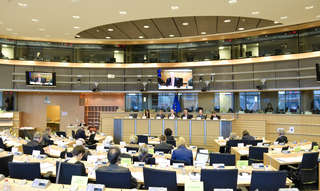 In his introduction, the Minister reminded those present of the importance attached by the Presidency to a coherent, responsible and inclusive trade policy.

The launch of negotiations on a free-trade agreement with Tunisia on 13 October in his view illustrates the EU's commitment, since "this shows evidence of Europe's support for a country which is struggling to re-boot its economy". In this context, Jean Asselborn stressed that the Council is ready to begin a trialogue with the European Parliament on the subject of extraordinary olive oil quotas which the Commission has proposed to implement from 1 January 2016. It emerged from the debate that this approach is not without its concerns regarding its impact on the olive oil producing countries in the EU. But, as Jean Asselborn pointed out, the decision has been unanimously taken by the Council, and is a temporary decision.

The transparency of the negotiations and the coherence of different policies have also guided the work of the Presidency regarding trade policy, the Minister said.

Jean Asselborn returned to several issues that were on the agenda of the Foreign Affairs Trade Council (FAC)  on 27 November 2015.

Among them was the communication of the Commission on trade, issued on 14 October 2015, which has been the subject of conclusions "negotiated in record time". On this subject, Jean Asselborn mentioned the publication of Council mandates. While he is "personally a strong supporter of transparency", Jean Asselborn had to point out that "decisions to publish mandates will be taken on a case-by-case basis and on request, as stipulated in the interinstitutional agreement", since "it is a question of unanimity in the Council".

Jean Asselborn made a point of detailing the preparations for the 10th World Trade Organization (WTO) Ministerial Conference which will take place in Nairobi from 15 to 18 December 2015. During the FAC, the Ministers "weighed up the global balance that the EU could accept with regards to the three pillars of the Nairobi Package." "The Nairobi Package contains the parts of the Doha Development Agenda (DDP/DDA) for which the chances of securing results are considered most promising", explained the Minister while reading the questions linked to development, the issue of export competition in the agricultural sector as well as the improvement of transparency regarding the rules.

"Negotiations are likely to continue up until the very last minute", Jean Asselborn warned. He gave the assurance that the "EU will do its best so that the WTO will emerge stronger from this ministerial conference" which should "hold a frank and honest debate on the possibility of including new issues in the multilateral debate, while safeguarding the centrality of the development component of the current round of negotiations". In this context, he reminded those present that the Luxembourg Presidency delivered the European Union instrument of accession agreement on trade facilitation. According to him, the adoption thereof marks "a major success in the negotiation of the DDA and proves the willingness of the EU to move forward in Geneva". On the Council's side, work has been directed in particular to the operationalisation for the exemption of services in favour of less developed countries, Jean Asselborn stated.

On the sidelines of the WTO meeting, Jean Asselborn hoped to see the plurilateral agreement on environmental goods concluded at a political level. "This agreement also fits within the logic of the greater coherence of our trade, environmental, industrial and innovation policies", he explained.

The Presidency ensured the monitoring of negotiations on the Trade in Services Agreement (TISA) and "particularly ensured that the talks safeguard the right of our governments to legislate", outlined Jean Asselborn. Public services are excluded from the scope of the negotiations and European privacy protection measures will be maintained, he insisted, stressing that the Presidency has been committed to ensuring compliance with the European Community acquis.

Jean Asselborn spoke about work aiming at the EU's accession to the United Nations convention on transparency in arbitration between investors and states based on the treaties ("United Nations Commission on International Trade Law - UNCITRAL Convention"). Willing to "preserve the EU's credibility" in this case, he thought the "lack of a common agreement" involving all the Member States in the Council is "deeply regrettable"(…), while expressing the wish to pursue efforts to find a solution.

Transatlantic Trade and Investment Partnership (TTIP): "The ball is now in the Americans' court"

Discussing the bilateral negotiations underway, Jean Asselborn began with the agreement on the Transatlantic Trade and Investment Partnership (TTIP). The Presidency's efforts in this case aim for talks to reach "new quality levels in terms of substance, dialogue and transparency". In his eyes, the last months had been decisive in defining the path to follow on the most politicised subjects, whether regulatory issues, services, sustainable development, the modernisation of the investments protection system and public procurement. From this point of view, "the ball is firmly in the Americans' court", said Jean Asselborn.

The Minister referred to the Investor State Dispute Settlement mechanism between investors and states (ISDS), stating that he had lobbied parliamentarians in favour of the mechanism's reform. The new system proposed by the Commission in September, the Investment Court System (ICS) marks "a genuine break" and takes into account the recommendations of the European Parliament, explained Jean Asselborn, pointing out that the internal discussions within the Trade Policy Committee had been concluded in time to allow the Commission to formally discuss it with the United States from the beginning of November.

"The work aiming for ease of access to some classified documents relating to the TTIP by the setting up of reading rooms in the capitals of Member States is nearing completion", added Jean Asselborn, who sees it as "an important step in terms of transparency" and which permits a "debate to be held on the merits and the facts". This was one of the objectives of the Presidency, he pointed out, referring to the high-level conference which brought together the social partners of the 28 Member States. "I am pleased that it is now possible to discuss these negotiations in a calmer manner", he concluded, remarking that the "EU's goal is to conclude an ambitious and qualitative agreement between now and the end of next year, while stressing that substance takes precedence over the calendar". For him, this agreement should enable "the shaping of globalisation, for which we sometimes have the feeling of having lost control".

Jean Asselborn addressed the topic of the Comprehensive Economic and Trade Agreement (CETA), which is currently being fine-tuned. "I am convinced that we need to discuss with the new Canadian government as soon as possible in order to define the way forward, including the terms for the Investor State Dispute Settlement (ISDS)", he said.

The objective of concluding talks to reach an ambitious free-trade agreement with Japan this year has not been achieved, noted Jean Asselborn. On the other hand, the EU finalised the ratification process of the EU-South Korea free-trade agreement and negotiations for the EU-Vietnam free-trade agreement were concluded under the Luxembourg Presidency. The Minister reviewed the work carried out with the Association of South-East Asian Nations (ASEAN) members, as well as with African partners.

On the subject of Mercosur, Jean Asselborn noted that "negotiations are far from being concluded". As to neighbouring countries, he welcomed the trialogue agreement reached the day before on independent measures with the Western Balkans and called for continued dialogue with a view to implementing the agreement with Ukraine, while ensuring that the political and economic situation does not deteriorate further.

Jean Asselborn highlighted the steel industry crisis in Europe, pointing out that the Presidency had brought this topic up in different forums in order to discuss adequate and relevant measures (including trade policy measures), so as to address both the cyclical and structural challenges the sector is facing. It emerged from the brief discussion that followed that the topic is not unconnected with China being granted market economy status (MES), a topic which was also discussed during the FAC lunch and which is particularly complex. "If the EU decides not to automatically grant MES to China in December 2016, China could file proceedings against the EU through the WTO, under the dispute settlement", Jean Asselborn explained, who is concerned about the time needed to amend the anti-dumping regulation.

The proposal for a regulation on conflict minerals was one of the Presidency's priorities. "We are now very close to finalising the Council's position and can soon begin trialogue discussions with the Parliament", Jean Asselborn announced with regard to this subject.

Regarding the amendment to the anti-torture ruling, which is another priority, Jean Asselborn announced that the adoption of a Council mandate is planned for 2 December, and that a first trialogue would be held in its wake. "The Luxembourg Presidency has therefore achieved its objective", he stated.