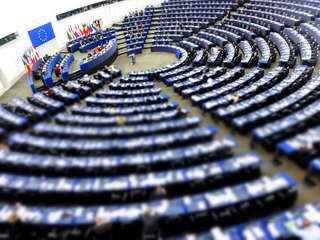 The Minister for Finances and President of the Ecofin Council, Pierre Gramegna, attended the plenary session of the European Parliament in Strasbourg on 24 November 2015, to participate on behalf of the Council in the debate on the draft joint EU budget for 2016, following the deal reached between the two institutions in the Conciliation Committee on 14 November 2015. This compromise, negotiated in Brussels under the aegis of the Luxembourg Presidency, was formally adopted by the Council on 24 November 2015 by written procedure, and will be submitted for voting to the plenary session of the Parliament on 25 November.

At the time of the debate, Pierre Gramegna commended "the very good result for all the institutions and, above all, for Europe", evoking "the unity, the solidarity et the efficacy of the European Union".

For the record, on 14 November 2015, the Council and the European Parliament reached an agreement on the 2016 EU budget in the context of the conciliation procedure initiated following the adoption of amendments to the draft budget by the Parliament on 28 October 2015, which the Council was unable to accept. Under this compromise, the level of the commitments is set at 155 billion euros, and that of payments at 143.89 billion.

The agreement specially provides, in response to the migrant crisis, commitments of up to 4 billion euros allocated to emergency assistance to the worst affected Member States and to those third countries accepting refugees, as well as to humanitarian aid. This budgetary agreement also reflects the importance given by the Council and the Parliament to the promotion of growth and job creation: the commitments for the EU framework programme for research, Horizon 2020, will reach 9.54 billion euros, meaning an increase of 31.8 million euros compared to the draft budget proposed by the Commission.

The Council and the Parliament reaffirmed that reducing youth unemployment remains a priority and they have committed to make the best use of the Youth Employment Initiative. In addition, the agreement relates to a set of measures totalling 6.98 billion euros to support European farmers, and to respond to the extension of the Russian embargo on imports of certain agricultural products from the EU and the difficult situation notably in the dairy and pigmeat sectors. As regards the commitment of the institutions of the EU in 2013 to reduce their staff by 5 %for the period 2013-2017, the Parliament promised to attain this objective by 2019, but excluded the temporary positions with political groups from the scope of application of the obligation to reduce.

The statements of the Council and of the Commission

During his speech, the Minister provided details on some of the sections of the 2016 EU budget. Pierre Gramegna stressed that the amounts required to address the refugee crisis had been doubled, going from 2 billion euros in the initial budget to 4 billion euros. These amounts will serve to finance both internal actions and actions in the countries of provenance, specified the Minister.

In addition, the necessary appropriations are provided for in order to reduce the payment backlog from 17 billion to 2 billion euros for the coming year.

He further noted that the budget anticipated "a certain budgetary prudence with a margin of nearly 800 million euros in payment appropriations".

The appropriations for the Internal Security Fund have been increased, stated the Minister.

By way of conclusion, Pierre Gramegna reiterated that the budget was trying to "find the right balance between three constraints", namely growth and investment, the urgencies and priorities stemming from the refugee situation, and the budgetary constraints inherent to the European Parliament and the Member States.

The Vice-President of the European Commission responsible for the Budget, Kristalina Georgieva, in turn highlighted the 3.2 % budget increase compared to the 2015 budget, with, amongst other things, the tripling of the funds allocated to asylum and to migrations. An increase of 1.8 % compared to the 2015 budget has been noted in the payments section.

On the subject of payments, she stressed that the Commission was working on the implementation of the payments plan agreed upon by the institutions, and at the same time it was allocating the limited resources available for increases to "where they are most needed".

She further emphasised that the Commission's strong commitment in this context to follow through with implementing the budget "in a manner that allows for reacting to new priorities as they emerge". Regarding the flexibility of the budget, she acknowledged that if it was indeed limited, a margin for emergencies had nevertheless been provided for 2016.

The Chairman of the European Parliament's Committee on Budgets (BUDG), Jean Arthuis (ALDE), commended the Parliament for having "fulfilled its mission" in a particularly constricting context. He welcomed the work of the three institutions and called upon MEPs to vote in favour of this compromise. "We wanted this budget to further growth and employment and to respond to the challenges of migrations and welcoming refugees", he underlined.

However he noted the "tightly locked" nature of the budget in the Multiannual Financial Framework (MFF) 2014 – 2017 adopted at the end of 2013, which "leaves us defenceless as soon as a major crisis arises", whereas an extraordinary situation requires financing that is likewise extraordinary.

In this regard, Jean Arthuis stressed the fact that the Parliament had consented to the MFF "under the condition" of a mid-course review, and that he expects the European Commission to submit a draft "that rises to the challenge" of the missions entrusted by the Member States to the EU and of missions to come. "I hope that the two branches of budgetary authority will be able to approach this meeting with gravity, lucidity, and courage", he stated, calling upon the Council to "display the same spirit as that which prevailed during the conciliation".

On the issue of payment backlogs, Jean Arthuis further stressed the fact that the current appeasement in this matter was the result of "the inertia and delayed start-up" of certain programmes, and that as of 2017, invoices would again "accumulate at exceptional levels".

The rapporteur José Manuel Fernandes (PPE) referred to a "positive agreement" which "responds to the wishes expressed and the challenges and priorities defined by the Parliament". Compared with the first draft of the budget, commitment funds were increased by 1.2 billion euros, and funds for payments by 2.65 billion euros, stressed the rapporteur, who welcomed the fact that the Youth Employment Initiative has become a priority for the institutions.

Gérard Deprez (ALDE), one of the budget rapporteurs, emphasized the "doubly rigorous" nature of the 2016 budget which, apart from an exceptional allocation of 15 million euros for building and computer security, represents an increase of 1.6 % compared to 2015, and that the Parliament also agreed on an additional effort towards 10 million euros of savings in operational expenditure.

The rapporteur also described the budget as a budget of institutional loyalty, particularly regarding the Parliament's commitment to reducing staff by 5 %, a reform which "it undertakes" to implement starting in 2019, with a specific timetable commencing in 2017. However, he "strongly" stressed that this effort will exclude the temporary positions for the political groups in the field of application of reduction obligation. "The political groups, their work, their dynamism, their confrontation and their capacity to compromise constitute the very essence of the dynamic of the European Parliament, and to diminish their ability to take action would be a serious blow which would only serve to reinforce the bureaucracy and the, often arrogant, technocracy of the other European institutions".

The Member judged that even if the 2016 budget is not the latest wonder of the world, it represented "a good transitional budget prior to review of the financial perspectives" in 2017.

At the time of the discussions, the majority of the parliamentary groups welcomed the agreement under the current circumstances, while cautioning for the future. Eider Gardiazabal Rubial (S&D) thus welcomed the agreement, which provides extraordinary resources in an extraordinary situation and which promotes investing in growth and employment. She nonetheless urged against complacency, as it is important to resolve the structural problems surrounding the budget procedure. His colleague Nedzhmi Ali (ALDE) believed that the level of commitments and payments has reversed certain tendencies of the Council and that it is headed in the right direction. Ernest Maragall (Greens/ALE) in turn noted that even if the budget is far from being optimal, with very little revenues and problems concerning expenditures, the flexibility margins have been used, and that his group would vote in favour of it in view of the work accomplished. In contrast, MEP Bernd Kölmel (ECR) does not share this positive assessment, criticizing the amount of funds allocated to managing the refugee crisis and the lack of long-term solutions.