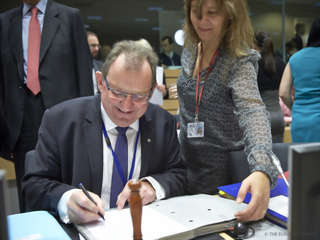 The Council was then informed by the Commission of the issues linked to international trade in agricultural products. 'Some very important meetings and some no less important negotiations are ahead of us', stressed Fernand Etgen, speaking about the WTO ministerial summit in Nairobi in December, future trade negotiations with competitive agricultural countries, and TTIP negotiations.

Regarding the implementation of a package of support measures for agricultural markets experiencing difficulties, Fernand Etgen indicated that 'the lack of hindsight' concerning implementation will require 'a more thorough assessment', which will be presented at the start of 2016.

Simplification of the CAP

The Commission presented its simplification programme for the Common Agricultural Policy (CAP) within the framework of its 'better regulation' initiative. It is necessary to determine the areas in which improvements can be made in the short- and medium-term within the framework of the recent reforms to the CAP, as well as to study what could be improved during a later set of reforms.

'The Commissioner briefed us on the state of play and the agenda for the simplification measures with regard to the priorities identified by the Council in May', explained Fernand Etgen during the press conference following the Council meeting.

In May 2015, the Council stressed that the implementation of the CAP should take more account of the principles of subsidiarity and proportionality. He also recalled the main principles to be respected in this process: preserve the objectives and the main elements of the reformed CAP, ensure the sound financial management of EU funds, focus on areas where those implementing the CAP as well as its beneficiaries would benefit most, and improve the clarity and consistency of legislation. Conclusions pointed to a short-term focus on the review of delegated and implementing acts of the reformed CAP. In the longer term, simplification efforts should also be made on the basic acts.

'Among the main simplification measures put forward by Member States, greening and rural development were a particular focus', explained Fernand Etgen. He also clarified that Member States remain divided about whether to consider medium-term amendments to the basic acts.

The Commissioner responsible for Agriculture and Rural Development, Phil Hogan, clarified that the simplification of the CAP would be 'a continuous element' of the agenda for the next four years. He presented four simplification measures to the Council. Two of these dealt with direct payments: the simplification of the preliminary checks system and the reduction in the number of checks in place, particularly by strengthening the efficiency of the selected samples. Regarding voluntary coupled support, the Commission intends to offer more flexibility to Member States for the transfer of funds between voluntary coupled support systems in order to grant them the possibility of better regulating these by taking into account economies of scale and the way in which small operators can be better targeted. Furthermore, it aims to simplify the regulations applied to young farmers.

Phil Hogan added that other proposals could be made during the December Council. He also said he was 'open-minded' to the possibility of amending the basic acts.

Ministers were also informed by the Commission of the issues linked to international trade in agricultural products. 'Some very important meetings and some no less important negotiations are ahead of us', stressed Fernand Etgen, speaking about the WTO ministerial summit in Nairobi in December, 'where the Doha Round must in principle be concluded', but also future trade negotiations with 'extremely competitive' agricultural countries such as Australia and New Zealand, without forgetting the negotiations underway with the United States on the TTIP. 'These are all challenges we must face, but which at the same time represent opportunities for our farming sectors', said the Minister.

On this subject, Phil Hogan clarified that the Commission will have a variety of trade missions in 2016, notably in Mexico and Colombia in February, in China and Japan in April, and in Indonesia and Vietnam in the autumn of 2016. 'We have authorised an impact assessment of the trade exchanges with Australia and New Zealand', he added. As for the TTIP, Phil Hogan expressed his wish to see 'a bit more movement' on the part of the United States in a certain number of areas. 'There will be another set of negotiations in February, and we hope to end with an ambitious agreement in 2016', he said.

'The Commission indicated that it was continuing to work with the Russian authorities concerning the possibility of opening up European exports of pork products only affected by a health embargo', declared Fernand Etgen, mentioning the Russian health ban on certain European pork products after cases of the African swine fever virus were discovered in the EU. There are many pork products which are not affected by the political embargo (live pigs, fat, lard and offal), and their export could resume if an agreement were reached with the Russian veterinary authorities.

Development of the market and market support measures

The Council invited the Commission to provide the latest information on the main developments in the market and the progress achieved in the adoption and implementation of the package of market support measures. 'The Commission has indicated to us that the milk market is becoming more stable even if the pork market appears to be deteriorating', explained Fernand Etgen.

To recap, the EUR 500 million package was presented to the Agriculture Council by the Commission on 7 September 2015 and detailed during an informal meeting on 15 September 2015. It aims to ease the short-term difficulties and improve competitiveness among EU farmers. These support measures came into force in mid-October. 'Today, the Commission has taken stock of the latest developments in the market and has informed us of the execution of these measures', said Fernand Etgen, stating that 'the lack of perspective' on implementation will require 'a more thorough assessment, which we hope to have at the start of next year'.

At the request of the Italian delegation, Ministers also discussed the future of the sugar sector, which is currently in a difficult economic situation. Italy wants a 'soft landing' when the quota system expires in 2017.

The Council was briefed by the Presidency on the state of play of the evaluation of the school fruit, vegetables and milk schemes (13962/15). Negotiations on the subject have stalled due to an institutional disagreement concerning the legal basis of the proposal. 'Negotiations with the Parliament on this dossier have been difficult, since a date was not fixed at the last trilogue for another meeting', indicated Fernand Etgen, prior to expressing his belief that the negotiations can continue and be completed quickly.

Finally, the Council adopted a regulation making the placing of novel foods on the EU market faster and cheaper, while preserving the high level of protection of human health.