Under the Luxembourg Presidency of the Council of the European Union, the 2015 edition of the 'European Data Forum' is being held in Luxembourg on 16 and 17 November 2015. This annual meeting of industry, research, public authorities and community initiatives, devoted to the challenges relating to Big Data and the data economy, aims to respond to the question of "how to use data integration in a European Digital Single Market?".

"To fully reap the potential of the rise of Big Data we have to ensure that data, its relays and its intermediaries, can all be trusted", explained Xavier Bettel. 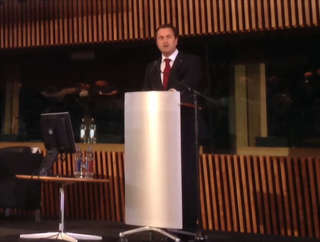 In his opening address delivered on 16 November 2015, Xavier Bettel, Prime Minister and Minister of Media and Communication, stressed how much "digital technology is no longer "just a sector" – it is an essential element of competitiveness, the lifeblood of our economies, and more and more, of our societies". In his view, the challenges that exist, both in Luxembourg and in the EU, are, how to develop the digital skills we need, how to train tomorrow's data specialists, how to facilitate the creation of new innovative companies, how to develop a more open data policy, or even how to ensure data protection in an increasingly interconnected world.

But one of the biggest challenges is the cross-border nature of new technology, noted Xavier Bettel. And to address it, he advocated "a Europe-wide framework and cross-border cooperation". In this context, Luxembourg, which is always in favour of greater integration, fully supports the Commission, which has made the digital economy a priority. He, therefore, immediately praised its initiative on the single digital market. Xavier Bettel stressed the horizontal approach adopted by the Commission, which is also that of Digital Lëtzebuerg.

Xavier Bettel, who focused on the Juncker investment plan, expressed his hope to see increased investment in backbone connectivity across borders. The Prime Minister believes that every community across the continent should have access to broadband Internet, whether via fibre, cable, mobile telephone or satellite. He also hopes that investments will be made in Europe's data processing capacity, which is not limited to infrastructure, but also covers training and attracting talent.

"Every day, Luxembourg bears the burden and limitations of the fragmentation of Europe’s digital market into 28 national markets", lamented Xavier Bettel. The Prime Minister is concerned about the consequences of these difficulties for the "European tech champions", and notably the smallest of them. "It is more legal certainty, more quality infrastructure, and more Europe that our entrepreneurs need and want", he said before declaring that it is "an area where we can demonstrate that Europe is able to deliver".

Todays’ breakthroughs are in "data-driven innovation", noted Xavier Bettel. According to him, "to fully reap the potential of the rise of Big Data we have to ensure that data, its relays and its intermediaries, can all be trusted". For that, we must modernise rules on data protection, taking account both of the legitimate concerns of citizens in terms of privacy as well as the scientific and economic interests of the world of research and business. In this regard, he recalled that the reform of the legal framework for data protection is one of the first priorities of the Luxembourg Presidency, which is working to find an agreement by the end of the year. "Achieving a single set of rules across Europe will be a major milestone towards a fully functional Digital Single Market, and will provide much needed legal certainty at this crucial time", he concluded.

For Andrus Ansip, privacy and data protection are "an essential competitive advantage"

Andrus Ansip, Vice-President of the European Commission responsible for the Digital Single Market, began by noting the fascinating power that intangible data has acquired today by becoming a source of progress and opportunity. However, he acknowledged that data policies and rules do not reflect a fast-changing reality. The very concept of data is changing. The Commissioner feels that it is necessary to give it a new definition, but also to define a new relationship with data. He said that if data can be seen as "a commodity", it must remain as open as possible. 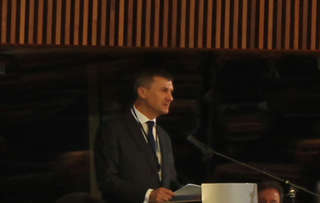 "The starting point for anything to do with data is privacy", insisted the Commissioner, conscious that data protection is one of the main concerns of users. "This must be respected – because trust is everything", he stressed. In his eyes, we must stop viewing privacy and data protection as obstacles to economic activities. Instead, he confirmed, they are "an essential competitive advantage".

As for the growth potential of the data economy, which shows 40% growth per year, Andrus Ansip warned against the fact that it would remain limited if the free circulation of data within the EU does not become a reality. However, he noted that, at present, legal or technical barriers limit cross-border data flows. According to the Commissioner, it is up to the legislator to identify where the barriers are throughout the data value chain: this means, for example, standard problems when data is generated, limitations in data transfer or fragmented rules as regards data storage. But we must also improve the EU's options in terms of data processing and analysis. On this point, there are barriers in terms of skills, slow development of the data ecosystem and a lack of marketplaces for reusing data, explained the Commissioner.

Andrus Ansip concluded that the Commission's ambition is to make the data economy work in the EU, which aims to establish legal certainty for personal data, eliminate unjustified restrictions on the location of data, offer consumers and small businesses the ability to transfer data safely, establish agreements on safe and sustainable data transfers with the EU's main international partners, launch a European Cloud Initiative or even improve conditions for re-use, access and greater openness of public and business data.