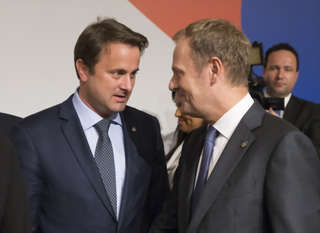 On 11 November, Xavier Bettel, the Prime Minister of Luxembourg, gave a speech at the opening session of the Valletta Summit on migration acting in his capacity as Head of Government for Luxembourg which currently holds the rotating Presidency of the Council of the EU.

The EU Heads of State and Government have gathered at the meeting with their counterparts from African countries to consider migration issues. The summit's aim is to emphasise the fact that migration is the shared responsibility of countries of origin, transit and destination. Discussions will essentially focus on the following points: addressing the root causes of migration; intensifying work on promoting and organising legal migration channels; enhancing the protection of migrants and asylum seekers; tackling the exploitation and trafficking of migrants; and improving cooperation on returns and readmissions.

In his speech, Xavier Bettel stated that "Europe is experiencing its greatest migration crisis since the Second World War". Addressing the African Heads of State and Government, he added: "It is important for us to be meeting now because we are currently at a critical turning-point, in so far as the European Union finds itself compelled to redefine its policy for border management, with regard to receiving migrants and refugees, while remaining faithful to the values  of the Union and which define us as the European Union. Europe wants to remain open and faithful to its values."

Xavier Bettel takes the view that "we need to strike a balance between the humanitarian imperatives that challenge us all and the need to think more deeply about the actions to be taken in the medium- and long-term."

He spoke of the "political crises on our doorstep" and the need "to anticipate together the major trends of the 21st century". He referred to the exponential growth in population, the power of telecommunications in accelerating mobility, urban migration and the concentration of people in towns and cities and climate change. In the Prime Minister's view, in view of these challenges "we have to find a sustainable solution, and we can't do this alone".

He called for "open, honest and regular dialogue", mutual trust and a deeper partnership with Africa both in the future and from December within the framework of COP21.

He also stressed that "relations between our two continents cannot be built upon illegal or irregular migration, which damages the fundamental rights of your citizens and which only serves to enrich the networks of human traffickers and smugglers".

He also described the risk that such illegal or irregular migration "could increase the number of people in the EU advocating for exclusion which primarily affects your fellow citizens and risks provoking a general response to migration that nobody around this table wants". To sum up, he believes that a "two-way" solution must be found on migration.

Xavier Bettel then noted that eight out of every ten migrants come from developing countries. He acknowledged that increased budgets for development cooperation are not popular in the EU and that elected representatives find it difficult to justify them to their voters. He believes, however, that the problems experienced by most Europeans are "first-world problems" compared with the life-or-death problems faced by people in Africa. "Setting aside 1% of GDP for public development aid is not a luxury but a duty", he declared.

Xavier Bettel believes that it is "important to invest in people, to give future generations the hope that they will be able to pursue an education and have prospects, in so far as if young people are leaving their countries, it is because they see no future there". In his view, providing opportunities for the future is the long-term strategy for preventing conflicts and preventing young people from becoming ensnared by extremism or terrorism. "I prefer to invest in people rather than in weapons", he added, before announcing that "my country will contribute EUR 3.1 million to the Trust Fund".

Xavier Bettel expressed his hope for the following day that the summit will be able to adopt joint conclusions because it would be difficult to explain a failure to do so to European citizens.

He concluded with an appeal to the African Heads of State and Government: "In view of the scale of the challenge that we are facing, humanitarian and development aid will, however, not be enough to meet the expectations of African youth who are full of hope and ambition.Today there are nearly one billion of them, tomorrow there will be two billion and, the day after that, four billion. The response they are waiting for lies entirely in your hands, and we Europeans can only assist you in your efforts".