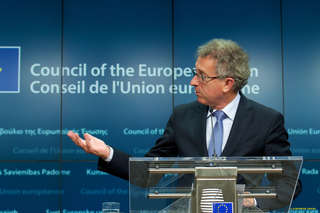 European Union (EU) Economy and Finance Ministers met in Brussels on 10 November 2015 for the "Economic and Financial Affairs" (ECONFIN) Council, chaired by the Minister for Finance, Pierre Gramegna.

During this meeting, the Council adopted conclusions on financing the fight against climate change, with a view to the climate conference in Paris, and also on the European Commission's action plan aimed at creating a Capital Markets Union. In the Banking Union dossier, ministers agreed on the bridge financing for the Single Resolution Fund, opening the way for the functioning of the fund from 1 January 2016.

During a press conference after the meeting, Pierre Gramegna pointed out that the subject of the cost of the refugee crisis had again been raised by ministers, while the Commission presented its analysis of the treatment of the expenditure relating to this crisis under the Growth and Stability Pact (GSP).

The Commission, which had been tasked with leading the economic and financial analysis of the impact of the refugee crisis during the informal meeting of European Economy and Finance Ministers in Luxembourg on 11 September 2015, had been invited by the Presidency to analyse the extent to which this crisis could be regarded as "exceptional" under the GSP (which would have the result of neutralising this expenditure regarding the European rules on the budget deficit).

"In its analysis, the Commission was of the opinion that this expenditure could be deemed exceptional",welcomed Pierre Gramegna, who pointed out along with the Vice-President of the Commission in charge of the Euro, Valdis Dombrovskis, that the institution would make its assessment "case-by-case" on the basis of the progression of the expenditure relating to to this crisis in the Member States. "This will be valid for the years 2015 and 2016 with the expenditure from 2014 as a basis for comparison", added the Minister.

"The Commission remains fully committed to applying the GSP", the Commissioner indicated, but "this also includes the flexibility set out in the Pact to react to unusual events outside the control of Member States concerned and which have a major impact on public finances", he continued.

In the Banking Union dossier, Pierre Gramegna said ministers had reached a political agreement on the remaining questions on the bridge financing for the Single Resolution Fund (SRF) This agreement, which will have to be finalised in the Council's preparatory working groups, paves the way to the conclusion of an definitive agreement from the ECOFIN Council in December 2015 and to the functioning of the SRF from 1 January 2016.

It was recalled that the SRF, which is designed to finance the orderly resolution of failing banks in parallel with the internal bailing-out of shareholders, forms part of the "resolution" section of the Banking Union and should gradually be strengthened from January 2016. It will be funded by national contributions from Member States raised from the banking industry and will progressively be mutualised, with capital supposed to reach a level of some 55 billion euros between now and 2023. In this context, it will be important to guarantee the fund, which will have to be operational from 1 January 2016, to be strong enough during its set-up phase, which explains the need to ensure bridge financing during this transitory period.

During their informal meeting in Luxembourg in September 2015, ministers had estimated that national credit lines, subsequently compensated by industry, were the only conceivable solution in the short-term, as clarified in the information note published prior to the meeting. In this regard, however, certain Member States feared not being able to mobilise the funds in the time periods envisaged, and asked for the option to scale up, while others insisted on the need to ensure national adoption procedures.

The "consensus" agreed by the ministers aims, according to Pierre Gramegna, to grant Member States the option to apply national procedures in the event of a demand for mobilisation of national credit lines as well as giving the authorisation to proceed with a scaling-up of payments, on condition of the first payment "being substantial", he said. Questioned by the press, the Minister clarified the figure mentioned informally was 50 % of the total amount of the call for funds.

The Council welcomed the first group of measures drawn up by the Commission and stressed the need to provide an ambitious long-term programme as well, in the conclusions adopted by ministers on the Commission's action plan aimed at creating a Capital Markets Union (CMU) in the EU.

For the record, the plan aims to set up a CMU in the Union which would be fully functional by 2019. It laid down various measures designed to strengthen capital markets in order to attract a greater volume of investment, including foreign investment, for companies and European infrastructure projects. One of the main objectives is to improve access to financing for SMEs and young European companies, especially in the sector of innovative industries.

More immediately, work in this area is focused on two legislative proposals judged as "urgent", said Pierre Gramegna. As for the first one, which concerns the securitisation of financial assets and aims to make this process more transparent, simpler and of higher quality, the "Presidency has worked quickly in a bid to reach a political agreement, if possible by the end of the year". As for the second one, which aims to amend the directive concerning the prospectuses to be published for the negotiation of securities trading, in order to reduce administrative charges, notably for SMEs, the Commission's proposal is expected in the next few weeks and the Presidency hopes to be able to start discussions.

The Council also had a first exchange of views on a package of short-term measures presented by the Commission on 21 October 2015 with the aim of implementing the Five Presidents' Report on the deepening of Economic and Monetary Union (EMU) in the EU. To reiterate, this report adopted in June 2015 by the European Council urges the EU to take measures in several areas and to implement them in stages.

The first phase, which will began in July 2015, is aimed at making the EMU more resilient by relying on the existing tools and optimising as much as possible the use of treaties in force; this involves a "deepening by doing".

Throughout the second phase (the "achievement of the EMU"), broader actions will be put in place in order to make the process of convergence more binding by means of, for example, a set of benchmarks for convergence jointly identified which could ultimately become legal in nature as well as a Treasury of the euro zone. The objective is to attain the final phase - a deep and genuine EMU - by 2025.

The package of measures from the Commission is essentially linked to the first phase and primarily contains proposals relating to the unified representation of the eurozone at the heart of the IMF, the creation of national competition councils in the eurozone and the setting up of an independent advisory European Fiscal Board.

In this regard, Pierre Gremagna said that a consensus was being reached between ministers on the need to "strengthen the European semester, whose rules must be simplified, more transparent and coherent". "On all the other subjects, this was a first exchange of views and it is necessary to continue this work", he said.

The Council also adopted conclusions on financing the fight against climate change, from the perspective of the 21st Conference of the Parties to the United Nations Framework Convention on Climate Change (COP21), which will be held in Paris from 30 November to 11 December 2015. The conclusions make up a second part of the negotiations mandate of the EU, given that the "Environment" Council already adopted conclusions on 18 September 2015.

In its conclusions, the Council reaffirms that the EU and its Member States are resolved to furthering developed countries' aim of mobilising annually, by 2020, 100 billion dollars. Against this backdrop, the Council calls for all countries able to do so to provide financing for mitigation measures for climate change and adaptation to the consequences. "With this agreement, the EU is playing its part as one of the main motors of this conference and one of the actors ready to contribute in a significant way to the needs of this area", stressed Pierre Gramegna.

Valdis Dombrovskis for his part said that the EU, with 14.5 billion euros invested in climate financing in 2014 (compared to 9.5 in 2013), was the most important contributor in this area. Moreover, the objective is to exceed these amounts in 2015, indicated Pierre Gramegna, and the exact figure will be known before the COP21, he said.