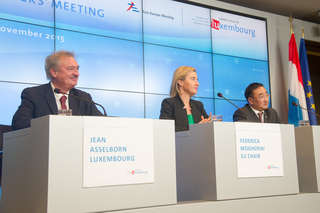 The 12th Asia-Europe Foreign Ministers' Meeting (ASEM) organised in Luxembourg in the context of the Luxembourg Presidency of the Council of the European Union, ended on 6 November 2015 after a second day of discussions. During the final press conference, the Luxembourg Minister for Foreign Affairs and Chairperson of the meeting, Jean Asselborn, hailed a "very important" meeting during which the discussions tackled a series of priority subjects such as climate change, the Sustainable Development Programme for 2030, the management and reduction of disaster risks, connectivity and the future of ASEM.

Climate change connectivity and the agenda on security

The High-Representative of the Union for Foreign Affairs and Security Policy, Federica Mogherini, opened the press conference by hailing the "two intensive days of work" during the forum, which brought together no fewer than 53 delegations (21 Asian delegations, 31 European delegations and an Asian Secretary-General), representing 60 % of the world's population, global trade and GDP. "All of us are able to make a difference in the world", she declared.

During the meeting, the Ministers started by discussing climate change, a few weeks before the Paris Climate Change Conference (COP21), stated the High-Representative.  "We are determined to do everything possible to make the Paris Conference a success", she declared. In that regard, Jean Asselborn was optimistic about the expected results. "Without going into any detail, I have seen that China and India - two extremely important countries in this matter - are committed and constructive", he stated.

On the subject of connectivity, the second subject on the agenda, Federica Mogherini recalled that it was the "keyword in both Asia and Europe". Ministers agreed on "many concrete projects and on ways to share our experience in the field of connectivity and to strengthen links between our countries". This covers different aspects ranging from actual infrastructure to transport, including energy, digital connectivity and links between people, she added. Jean Asselborn insisted on highlighting the cooperation which has existed for several years between European and Asian universities. "It is an example of something with regard to which we can make even more progress in the future", declared the Minister who believes that it shows that connectivity is not an abstract concept "but that it can be translated into various concrete measures".

The Ministers also discussed the regional and international agenda in the field of security and stability. In this context, they "exchanged cooperation ideas on the subject of the migrant and refugee crisis and the fight against terrorism and radicalisation". Moreover, the Ministers discussed regional and international aspects, such as the war in Syria, the Israeli-Palestinian conflict, the situation in Libya, the South China Sea issue and the Korean Peninsula.

Finally, Ministers discussed the role and functioning of ASEM, which will celebrate its 20th anniversary in July 2016. "Asia is at the heart of European foreign and security policy", declared Federica Mogherini. Minister Asselborn hailed the commitment of the ASEM's different partners to pursuing and developing their relationships on various levels.  The Ministers also agreed that the commitment of civil society and other stakeholders (companies, parliamentarians, academics, students and journalists) "would help to improve ASEM's visibility", stressed Jean Asselborn.

In the same context, the Minister hailed the joint organisation by Luxembourg and the Asia-Europe Foundation (ASEF), of three major events held in parallel to the meeting: the 1st Young Leaders Summit which brought together about 120 young people from the two continents on the subject of work, as well as the 10th Symposium of ASEF journalists and the "On the Go" photo exhibition in Luxembourg. These "topical and successful" activities contribute "effectively to creating links between people", as well as informing people about the work of ASEF and ASEM, declared Jean Asselborn.

The discussions concluded with the signing of a declaration by the Presidents of the session entitled "Working together for a sustainable and secure future", stated Federica Mogherini. "Although it is a declaration signed by the session Presidents, the delegations were also able to consult it and are at ease with the document", she stated.

Mongolia is hosting the next ASEM Summit in July 2016

The Mongolian Minster for Foreign Affairs, Lundeg Purevsuren, whose country will host the next ASEM Summit on 15 and 16 July 2016 in Ulan Bator, stressed that the success of the 2016 meeting will be all the more important in that it will mark the forum's 20th anniversary. "We intend to publish a declaration after this Summit which summarises the lessons learned over ASEM's 20 years and defines the working guidelines for the coming decade", he declared. He also highlighted his country's wish to contribute to improving cooperation between the two continents, as was the case in the 13th century at the time of the Mongol Empire.