The EU's Agriculture Ministers met in Luxembourg on 22 October 2015 for the Agriculture and Fisheries Council. Presided over by Fernand Etgen, the Luxembourg Minister for Agriculture, the Council reached a unanimous agreement on fishing quotas in the Baltic Sea. It also discussed the contribution of agriculture to climate change mitigation. 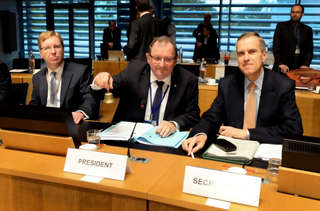 The Ministers reached a unanimous agreement on fishing opportunities for 2016 for certain fish stocks in the Baltic Sea, based on a draft regulation by the Commission. This concerns the annual proposal defining the quantity of fish which European Union fishermen are allowed to catch out of the ten main commercial stocks in the Baltic Sea, a quantity also referred to as the "Total Allowable Catch" (TAC). The proposed measures have been established taking into account the available scientific advice and, in particular, the reports drawn up by the International Council for the Exploration of the Sea (ICES).

It is an "important agreement both for the sustainability of stocks and for the fisheries economy of the countries concerned", declared Fernand Etgen during a press conference following the Council. He highlighted the importance of the efforts of the BALTFISH coordination group and its Polish Presidency in securing this agreement.

The European Commissioner in charge of Environment and Maritime Affairs and Fisheries, Karmenu Vella, hailed an agreement which will help to ensure sustainable fishing, because it respects the Maximum Sustainable Yield (MSY), i.e. the viability of stocks. The most "complicated" issues revolved around cod stocks (Eastern and Western), explained the Commissioner. For both stocks, the Council agreed on a reduction of 20 %.

The Commissioner welcomed the fact that it has been recognised that these stocks have been overfished and that the measures adopted will help them to recover. The Commissioner cited additional protection measures: the extension of the seasonal closure period as well as Member States' commitment to managing recreational fishing more effectively. He again explained that the Commission "recognises the need" to help local fishing communities to adapt more easily to these "major reductions" in quotas, by taking account of the socio-economic effects.

The Ministers also exchanged views about the annual consultations between the EU and Norway. According to Fernand Etgen, this "constructive" exchange was an opportunity to review the fish stocks managed jointly by the EU, Norway and has allowed Member States to "express their concerns about certain quota exchanges negotiated with Norway".

The Ministers also debated the contribution of agriculture to climate change mitigation, on the basis of a document prepared by the Luxembourg Presidency. This debate is part of the preparations for the Conference of the Parties to the United Nations Framework Convention on Climate Change (COP 21), which will take place in Paris from 30 November to 11 December this year.

The document explains the impact of agriculture on climate change: it both emits greenhouse gases (GHG) and absorbs them, notably through the storage of carbon in the soil organic matter and in biomass. Thus, in 2012, the agricultural sector represented 469 million tonnes of CO2 equivalents, i.e. 10.3% of the EU's total GHG emissions. According to the document, the agricultural sector could be a "key actor" in the direct or indirect reduction of GHG emissions, for example by contributing to the mitigation of emissions from the waste sector through the transformation of organic waste into biogas.

Agriculture, along with forestry, is the only sector which both emits and reduces greenhouse gases, explained Fernand Etgen. He insisted on the fact that the agricultural sector "faces a dual challenge, namely to reduce greenhouse gases and, at the same time, ensure sustainable food security". For the Minister, agriculture "will be part of the solution" in the context of the COP21. The results of the discussion will be communicated to the Environment Council, Fernand Etgen noted.

According to Fernand Etgen, several Ministers stressed that we should give priority to certain existing measures, such as the processing of manure or the installation of biogas plants. "There is substantial potential for the circular economy", the Minister reiterated.

In order to strengthen the link between the results of science and agricultural practices, the Council stressed the need to continue to finance research activities. In this respect, the European coordination efforts initiated through the European Partnership for Innovation are essential, explained Fernand Etgen. "It is also crucial to communicate the research data to farmers who are aware of the latest research results, which will help innovative solutions to be put into practice", he added.

The Council discussed a Dutch initiative concerning crop protection. The aim is to promote a wider range of more environmentally-friendly measures, substances and practices among farmers. "Many Member States have supported this approach", declared the Minister Fernand Etgen during the press conference.

The Presidency had invited Ministers to discuss over lunch "the impact of a recent decision by the European Patent Office (EPB) concerning the plant breeders' rights regime" which has "attracted great criticism and generated many concerns". According to these decisions, plants or parts of plants will now be patented even if they were obtained through traditional reproduction methods. The subject had already been discussed during the Agriculture Council of 13 July 2015.

Fernand Etgen deems the patenting of plants to be "worrying", especially because of its effects on the agricultural sector. A document made public was used as a basis for discussion. The results of the debate will be sent to the Ministers of the Competitiveness Council, "who are responsible for intellectual property and, in particular, for questions involving Directive 98/44/EC on the legal protection of biotechnological inventions", explained Fernand Etgen.