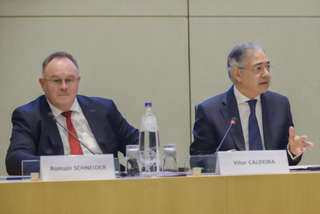 In his introductory speech, Vítor Caldeira, the President of the European Court of Auditors, recalled that 2015, which marks the end of the millennium development goals (MDGs) and the adoption of Agenda 2030 and the SDGs by the UN Member States at the United Nations Summit on Sustainable Development in New-York in September 2015, had seen 'the world unite on the future world framework to eradicate poverty and bring about sustainable development.

Vítor Caldeira emphasised 'the huge challenge' that these goals represent, and the need to take immediate action. 'Developed and developing countries must work together, more closely than ever before, to build peaceful and prosperous societies', he said.

Various sources of funding must be mobilised to meet these challenges

Romain Schneider, the Minister for Development Cooperation and Humanitarian Affairs, stressed the importance of explaining more clearly to citizens and institutions why development cooperation was the responsibility of each and every person, 'beyond calls for international solidarity that can sometimes be too abstract'. In reality, cooperation is 'in all of our interests'. In a reference to the migration crisis in the EU, he said that the instability of particular regions should 'make us see the need to act where crises, hunger and despair are rife'.

The minister spoke about the international conferences organised in 2015, referring firstly to the conference in Addis Ababa (Ethiopia) in July 2015 which set an agenda for funding development. 'Various sources of mutually complementary funding, both public and private, must be mobilised to meet the challenges of sustainable development', stressed the minister, who believed that overseas development assistance (ODA) 'is still as relevant as ever and will be a crucial point of leverage'. Accordingly, 'Luxembourg will keep up its contribution of 1% GNI (Gross National Income)', he said, pointing out that it was vital to make sure policies were consistent so as to guarantee aid effectiveness.

In the minister's view, the new Agenda 2030 adopted in New York lies within 'the tradition of the great founding acts of the United Nations, in its desire to send out a universal and all-encompassing message'. He pointed out that the SDGs highlight the three dimensions of sustainable development - economic, ecological and social.  Besides environmental sustainability, which is considered to be 'fundamental for ensuring the lasting prosperity and well-being of all, while keeping within the constraints imposed by our planet', Agenda 2030 should guarantee decent working conditions, universal health care and welfare protection for all, he said.

Therefore, the SDGs must be implemented, he continued, noting that the technical work on indicators would be finalised in March 2016. In this context, the EU and its Member States should 'develop a method and the resources to meet these ambitions', according to the minister, who said that the ministers responsible for development and the environment were to discuss the subject at the Environment Council in Luxembourg on 26 October.

Finally, Romain Schneider considered that the conferences held in July and September provided a firm basis for the COP21 Paris conference on climate change. This will be 'the last big meeting to have a decisive influence, not just on developing countries, but definitely including them', he pointed out.  'The universal and global nature of the sustainable development goals requires action beyond our usual ways of working, to find this coherence and new synergy with governments, the private sector, civil society and each and every individual, inspired by an inclusive approach', he added.

Neven Mimica, Commissioner for International Cooperation and Development, welcomed the universal nature of Agenda 2030 which blurred the traditional distinction between donor and beneficiary countries and recognised 'our shared responsibility and common destiny'.

In particular, the commissioner highlighted the fact that accountability on the part of the States, meaning the need to be held to account, would be central in successfully implementing the SDGs. 'Openness, transparency and accountability are invaluable at each stage in implementing the new agenda', the Commissioner pointed out. He believed that only this approach would make it possible to honestly appraise the successes and failures of the SDGs. He also said that it would be necessary to involve all stakeholders, not just governments.

2015 is a key year for development

Linda McAvan, President of the European Parliament's Development Committee, welcomed the initiative to make 2015 the European Year for Development, because that enabled development to be understood and therefore to obtain public assistance. The MEP again referred to 2015 as a 'key year' for development, citing the numerous events on the subject planned throughout these 12 months: the Addis Ababa conference, the United Nations Summit on Sustainable Development and COP21, which aims to reach a global agreement on climate change.

Linda McAvan pointed out that only four EU countries had actually achieved the objective of setting aside 0.7% of their Gross National Income (GNI) for development aid. The MEP argued for an increase in tax receipts from companies in developed and non-EU countries. She also raised the issue of the lack of private investment in developing countries, which as a consequence did not enable these countries to raise these tax receipts.

Regarding the 17 SDGs defined in late September 2015 in New York, the MEP spoke of a 'turning point' as compared with the approach that had enabled the MDGs (Millennium Development Goals) to be defined in 2000. Whereas the MDGs only applied to developing countries, the SDGs have a more universal value and apply to all countries, she said.

Grete Faremo, Executive Director of the United Nations Office for Project Services (UNOPS), spoke about the 8 MDGs, which she described as 'extremely ambitious', or even 'unrealistic, according to some people'. While the MDGs were designed to put an end to hunger, infectious diseases and lack of education in the world, as well as lack of public sanitation, it must be acknowledged, today, that the first 15 years of the century had been anything but peaceful in large parts of the world, the speaker said. 'The window of opportunity that had emerged at the turn of the century was replaced in many regions of the world by unrest, despair and fear for the future', she added.

The MDGs had, nevertheless, for the most part achieved a certain degree of success, she said, mentioning the areas of child health and safety, gender equality in primary education, infant mortality and maternal mortality during childbirth and access to fresh drinking water.

According to Grete Faremo, the SDGs differ from the MDGs in that they provide global solutions to global challenges, which concern countries in Europe just as much as in the rest of the world, in areas such as health, education, sustainable energy, inclusive economic growth, the quality of the environment and equitable consumption.

The speaker also called for a change to our conception of ODA which, as traditionally viewed, is associated with charity and aid to the poorest in distant lands, and through the sharing of our collective surplus. Today, it is more about financing investments in our immediate neighbourhood, she said, referring to the countries of origin of migrants and refugees who had arrived in Europe in recent years. 'Today, we are no longer focusing on charity, but rather on achieving a set of common objectives that we all aspire to, investing in a collective future', she added.

Grete Faremo also emphasised the importance of private funding in relation to ODA in achieving the SDGs. ODA should aim to encourage private investment in sustainable development, she said. The speaker called on the EU to lead the way in Agenda 2030, by making contact with partners to explore new avenues of cooperation and to implement them, with the support of the various agencies, funds and organisations of the United Nations.

Summing up, Grete Faremo recognised that it would not be easy to achieve the SDGs by 2030, but that working together and being open to new methods and innovative technology would make it easier to address global development and humanitarian challenges.