Gender equality in economic decision-making was the subject of the second day of an international conference organised in Mondorf-les-Bains by the Minister for Equal Opportunities and the Luxembourg National Council of Women (CNFL) on 15 and 16 October 2015 in the framework of the Luxembourg Presidency of the Council. At the conference, representatives from the political and economic sectors discussed the need for quotas and the obstacles which women still have to overcome. 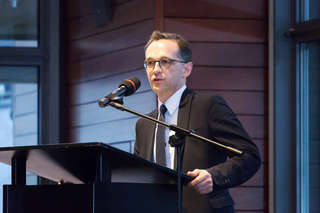 The guest of honour was Heiko Maas, the German Minister for Justice, who presented the reasons which drove the German government to propose a law introducing a quota of 30% of women in executive positions in large companies. Adopted in March 2015 by the Bundestag, the path to reaching this agreement was "long and treacherous", recalled Heiko Maas, adding that the economy had made voluntary commitments only in vain. "For many years, the political world trusted declarations of intent. But all the wonderful words went unheeded", declared the Minister. He insisted on the fact that, in 2014, the percentage of women chairing a board of directors of a DAX listed company had even fallen by 1.5 points to 6.3%. And, the fact that women represent 22% of the members on a board of directors was, in particular, a result of the work undertaken by trade unions and women's commitment as trade union members", he highlighted.

"The political world accorded companies a great deal of time, but it did not work. The time for appeals was over. It was time to set up other instruments for the economy", declared Heiko Maas. For him, quotas are a "matter of justice", but also a matter of "good economic sense" in view of Germany's demographic development.

The Minister explained that he did have some doubts about the economic sector's desire to promote women when he heard the arguments presented by some economic leaders, who were "cultivated men". For example, these explained that they would never be able to find so many qualified women so quickly and that, as a result, they would have to hold several positions. By doing this, we would not be doing women a favour and we would be putting too much pressure on them, they said. For Heiko Maas, the last straw was the declaration by the Director of the Deutsche Bank, Josef Ackermann, who, in 2011, said that women would make boards of directors "more attractive and more coloured". For Heiko Maas, this proves that women are perceived as "figureheads" ("Dekoartikel" and "schmückendes Beiwerk" in the text).

"Quotas will render quotas useless, because having women in executive positions will become something quite natural", the Minister insisted. According to him, the law, which will come into force in 2016, is already bearing fruit because companies have to prepare their lists and propose women candidates. For Heiko Maas, the quota will prove to be an advantage for Germany as an economic site ("Standortvorteil") and will help to adapt companies' human resources policies, which, for "far too long have neglected" a policy in favour of women. He declared that it is not women who should adapt to the world of work, but the culture of work which should become more favourable for families.

When asked about the lack of places in nurseries and the fact that many women stop working after the birth of a child, Heiko Maas agreed that Germany is behind some other countries because women still have to justify returning to work after having children. The Minister expressed the hope that this tradition should change as a result of the quota system.

Stop wasting the resources of women, who represent 55% of young graduates

During a presentation, Annie Cornet, a Professor at the University of Liege (HEC), underlined the progress in the rate of women's employment, as a result of the fact that fewer women stop working after giving birth. The rate of employment of women who have a child was 78% in 2012 compared to just 37% in 1983. Almost half of women with three children were working in 2012, compared to 32% in 1983. She criticised the fact that women are barely visible in the economic press, where they represented just 16% of media coverage (in 2004).

Although women occupy more and more positions of responsibility, we must not deny situations of inequality and indirect discrimination based on stereotypes, insisted the Professor. For her, it is necessary to optimise resources and to stop wasting them in view of the fact that women represent 55% of young graduates. She highlighted the fact that women often arrive at the head of a company "by default", often as a result of a family takeover, and that most women tend to create their own company in the services sector.

Instead of quotas, which might stigmatise and penalise women as "quota-women", Annie Cornet appealed for "transparent examinations", citing the example of court bailiffs, a profession which is handed down from "father to son". The simple introduction of an examination had helped to bring the rate of women in this profession up from 3% to 30%, insisted the Professor.

Appeal for a more equitable sharing of responsibilities 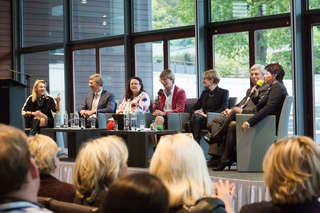 One of the participants was the Austrian MEP Evelyn Regner, the rapporteur of the draft directive on the presence of 40% of women on the boards of directors of companies listed on the stock exchange, proposed by the European Commission in 2012, but currently blocked at the Council. She called for a "level playing field" and transparent conditions in candidatures for positions of responsibility. According to her, the quota would be equivalent to transparent selection procedures and would guarantee equal conditions. She also appealed for sanctions and declared that things would not progress without the intervention of politics. Another effect of quotas is that the men selected would often be more competent. Instead of waiting another 50 or 100 years, quotas are needed in order to stop wasting resources, she believes.

Denise Steinhäuser, a member of the board of directors of BGL BNP Paribas, criticised the fact that many women only join boards of directors as trade union members and appealed for more efforts to be made by the State, banks and companies. She regrets the fact that women have to ask themselves if they can have children (or a career) - "a question which men never have to ask". She also regretted the fact that almost half of women hold part-time positions, a form of work which should be "made more attractive". According to her, companies have to make more efforts to keep women, and women also "have to want this".

Christiane Wickler, the President of the Fédération Cheffes d’Entreprise du Luxembourg (FFCEL) - the Luxembourg Federation of Women Business Leaders, explained that she was the only woman on a board of directors in Flanders, specifying that this did "not scare her", but that it was an enriching experience. She appealed for the relationship between men and women to be perceived more as a matter of competition rather than of power.

Yves Elsen, CEO of Hitec Luxembourg, deems that any entrepreneur who "wants a company with a long-term future" should hire women. He pointed out that his company had hired three women engineers for four positions advertised in the past 18 months, a sign, he believes, that "a change is underway". 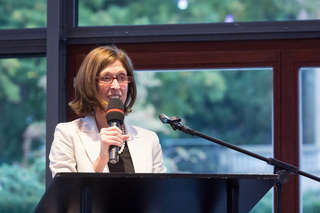 Luc Verbeken, CEO of ING Luxembourg, declared that women are extremely motivated between the ages of 20 and 30 years, but we lose them along the way", after a birth. Although he believes that diversity is a "normal and acquired" approach, he recognised that it is necessary to "go out and find women".

As a conclusion to the conference, Lydia Mutsch, the Minister for Equal Opportunities, insisted on the need for awareness and for committed and motivated companies, confirming her Ministry's intention to increase the number of positive actions. She appealed for a more equitable sharing of responsibilities, as much in private life as in professional life, calling on men to make more of a commitment in the field of education and care. According to the Minister, an "optimum mixture of measures" is required to achieve greater diversity, with voluntary and constrictive aspects. She again declared that she hoped an agreement concerning the draft European directive on the presence of women on Boards of Directors could be reached and that this would send a "strong signal".