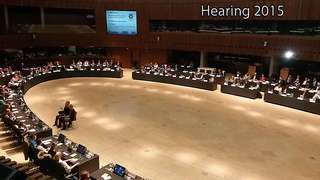 On 16 October 2015, 250 young Europeans met in Luxembourg where they had the opportunity to express their views and propose recommendations for inclusive education. The participants, aged between 14 and 25 years, with and without special educational needs, were invited to outline how their school takes care of them and to provide concrete examples about the way in which their teachers and classmates deal with their needs. It is the fourth sesssion of this kind since 2003, after two meetings in Brussels (2003 and 2011) and one in Lisbon (2007). The Luxembourg Minister for Education, Children and Youth, Claude Meisch, opened the event organised by the Luxembourg Presidency in cooperation with the European Agency for Special Needs and Inclusive Education. The recommendations formulated by the young people will be presented to the Ministers who will be meeting at the "Education, Youth, Culture and Sport" Council on 23 November 2015.

By way of introduction, the President of the session, Gil Steinbach, the Luxembourg representative of the European Agency for Special Needs and Inclusive Education, reminded the participants of the existence of the Convention on the Rights of Persons with Disabilities that was adopted by the General Assembly of the United Nations on 13 December 2006 and ratified since by many countries around the world.

The Minister, Claude Meisch then encouraged the young people present to express themselves on the subject of the inclusive measures from which they benefit in their country and those which need to be improved. "I strongly encourage you to seize this extraordinary opportunity to freely express yourselves. All too often, people who are not directly concerned do this in your place. Do not hesitate to say what you think, to formulate ideas which are not convenient for political decision-makers such as myself, it's your right, take advantage of the opportunity", he declared.

Martine Reicherts, Director-General of the European Commission's Education and Culture Directorate-General, emphasised that, since 2009 and the first cycle of the strategic framework, Education and Training 2020, the Commission had made the integration of schoolchildren with special educational needs into traditional education a priority.

“We are all of different colours and, together, we form a magnificent rainbow"

One of the recommendations laid out by the young people was, in particular, the need to take better account of the biographical information of young students with special educational needs, as well as of young people from different ethnic, religious and social backgrounds.  According to them, solutions should be adapted to the specific needs of each person. To that end, teachers should not only have expertise but also have access to any useful information about the young people concerned.

The importance of training teachers who are in contact with young people with special educational needs was a focus of the recommendations laid out by the young people. Furthermore, they believe that teachers should communicate more between themselves and cooperate in order to define the strategies adapted to students' needs.

Some also highlighted the need to organise common activities, designed for all students, including sports activities, in order to reinforce mutual understanding between young people. They also insisted on the importance of not accommodating young people with special needs in separate buildings, deeming that they need to be able to blossom among other young people.

Others again drew attention to the funding required to adapt facilities to the specific needs of young people, for example, installing access ramps or lifts.

“People with a disability have difficulty being accepted into their class because their appearance, clothing and behaviour are often different", declared one young speaker with regret. She underlined the importance of raising awareness among classmates so that they understand the disabilities of certain young people better and are able to communicate more with them.

Another speaker pointed out that, during the morning, in the working groups, the term "normal" was often used to describe young people without a disability, whereas the others were described as being "abnormal". “We have to start with ourselves. We have to use positive words to describe ourselves", she stressed. “We are all of different colours and, together, we form a magnificent rainbow", she insisted.

During the closing session, all the speakers said how impressed they were with the recommendations laid out by the young Europeans.

László Gábor Lovászy, a member of the United Nations Committee on the Rights of Persons with Disabilities, underlined the importance of modern technologies and innovative solutions which help to provide support to people with special educational needs. However, he pointed out that technology could never compensate for young people's need of social experiences and community life.

Catherine Naughton, the Director of the European Disability Forum, declared that it was impossible to propose a single solution valid for all the EU's Member States in view of the countries' different approaches to education. She believes that education should be inclusive not only for young people with special educational needs, but also for those from different socio-cultural backgrounds.

Marianne Vouel, the Director of the Service for Special Education at the Luxembourg Ministry of Education, Children and Youth, also insisted on the importance of teacher training. She then called on associations for the disabled to join forces in order to make their voices heard.

“We are all different, we all have different needs, and the challenge for our education systems is to address each person and offer each one the appropriate solution", declared Per Gunvall, President of the European Agency for Development in Special Needs Education. He highlighted the importance of equal opportunities in schools.