Ministers for Health as well as high-level representatives from the Member States, European Commission, World Health Organisation (WHO) and NGOs met on 12 October 2015 in Mondorf-les-Bains (Luxembourg) for a three-day conference entitled "Lessons learned for public health from the Ebola outbreak in West Africa – how to improve preparedness and response in the EU for future outbreaks". The Minister for Health, Lydia Mutsch, delivered the welcoming speech and awarded, after a first discussion panel, the "European Prize for Health" to deserving NGOs that are deeply involved in the fight against the Ebola epidemic in West Africa that caused more than 11,000 deaths and infected more than 28,000 people in 2014-2015. 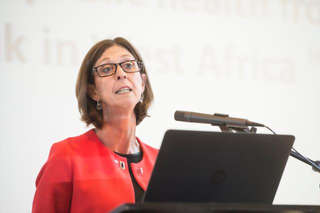 Ebola may seem under control, but we must still remain vigilant, said the Health Minister, Lydia Mutsch, during her opening speech at the conference. "We don't know when the next epidemic will strike us, but we do know in any event that cross-sectoral cooperation is crucial if we want to strengthen health security in the European Union", she pointed out.

The Minister stressed that the Ebola epidemic had "not only negative effects". Firstly, Ebola has allowed the development of new crisis management techniques in the EU through cooperation between public health, research, development and military authorities. It has allowed these stakeholders to test the application of the relevant decision on serious cross-border threats to health adopted in October 2013, stressed Lydia Mutsch.

The Minister praised the coordination meetings at EU level which had taken place during the epidemic, notably between the Emergency Response Coordination Centre (ERCC) and the Health Security Committee. These meetings are "vital" for keeping Ministers informed about the latest developments and create the necessary conditions to take informed decisions, stressed Lydia Mutsch.

Secondly, Ebola has shone a light on the importance of showing solidarity towards the countries affected, as well as between Member States. In this context, the Minister mentioned the example of cooperation agreements that Luxembourg has signed with two other Member States allowing the country to send possible Ebola patients to their specialized hospital facilities in case the national capacities were overloaded.

"The epidemic has served as a test for the whole of Europe", said Vytenis Andriukaitis 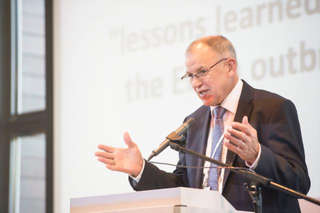 The European Commissioner for Health and Food Security, Vytenis Andriukaitis, pointed out that Ebola has served as a test case for EU's preparedness arrangements under the framework set by the Decision on serious cross-border threats to health.

According to the Commissioner, while Ebola "has taught us how we could be better prepared for future epidemics", it will be essential, in the future, to assist vulnerable countries to offer healthcare to everybody, starting with minimum hygiene standards and vaccinations. But we must also address the basic root causes, which are the lack of education, misperceptions and stigmatisation, said the Commissioner.

Vytenis Andriukaitis called for Member States to be more vigilant. "In this context, we need more cooperation and sharing, and for this we must use all the tools at our disposal", he indicated, citing the procurement agreements to purchase medical countermeasures which allow EU countries to jointly acquire, instead of individually, pandemic vaccines and other medical countermeasures.

Vytenis Andriukaitis mentioned the importance of prevention because "communicable diseases develop when all the right conditions come together", and in this context mentioned the role of vaccinations.

Finally, better coordination is necessary and we have to "involve all stakeholders when it comes to dealing with a crisis". The Commissioner called for humanitarian aid structures and health structures to cooperation closely. 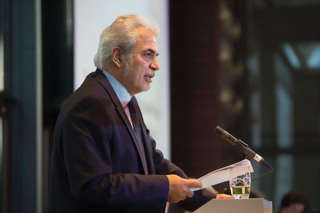 Christos Stylianides, European Union Coordinator for the fight against Ebola, insisted in his speech on the collective responsibility of the international community in the face of epidemics like Ebola, by affirming that there will be others in the future, notably as a result of climate change and the growth of the world population.

He thinks that the global response to Ebola left "much to be desired", emphasising that only one single organisation (Doctors without Borders - MSF) had, "over many months", taken on the "difficult task" of mobilising the international community after the start of the epidemic in March 2014. The Commissioner praised the "remarkable work" of the MSF, saying that it should never again have the role of "gap filler".

Christos Stylianides called on the international community not to be complacent. "We mey closer to zero cases now, but we're not there yet", he insisted, while WHO had announced on 7 October 2015 that no new cases of Ebola had been confirmed in the last weekly epidemiological record - the first time since March 2014.

The Commissioner however welcomed the rapid mobilisation of financial resources. According to him, the EU and Member States have made available two billion euros, of which 900 million came from the European Commission. He also praised the commitment of some countries to the three affected countries (France in Guinea, the United States in Liberia and the United Kingdom in Sierra Leone) and of the African Union and Cuba.

Christos Stylianides thanked Luxembourg for making available to the European Civil Protection Mechanism two specialist airplanes from the Luxembourg Air Rescue service (LAR) for the repatriation of infected people, as well as Germany which also provided an airplane. Thanks to the "MEDEVAC" service (for medical evacuation), 16 people were repatriated, the Commissioner pointed out, stressing the need to maintain this system in place in case of future crises.

He also insisted on the need to ensure the rapid deployment of four mobile laboratories in case of future crises, of which the first had been deployed during the first week of the epidemic in Guinea.

However, the Commissioner noted the "immense difficulty" in mobilising medical teams in December 2014, well before the outbreak of the epidemic. According to him, it comes down to the most important lesson to be learnt from the epidemic, and he therefore called for a "European Medical Corps" to be integrated into the European Civil Protection Mechanism.

This last point was further confirmed by Margaret Chan, WHO Director General, who pointed out that we could count on one hand the number of medical teams mobilised in a matter of weeks, contrary to one hundred teams mobilised during the Nepal earthquake.

Margaret Chan was critical of the fact that the international community was "poorly prepared" for epidemics like Ebola, considering that this was not the worst that could happen. In this context, the Director of WHO insisted on the need to reform the WHO, notably in the area of funding, which has to be "more predictable" in order to make it possible to react quickly in a crisis.

Maragaret Chan also stressed the need to invest in resilient and robust health systems. According to her, such systems form the basis for achieving the 17 sustainable development goals (SDO), adopted in September 2015 by the United Nations.

The WHO Director nevertheless regretted that only a third of the 194 countries that signed WHO's International Health Regulations (IHR) in 2005 comply with the minimal provisions. According to her, countries like Senegal, Mali and Nigeria, which have a certain degree of preparedness, have been better in dealing with the epidemic, compared to countries which did not have the means of isolating infected patients, or Liberia which only has 250 doctors for a population of four million people.

Margaret Chan also insisted on the need for transparency, by lamenting the fact that certain governments had not had the "courage" to report infections, as well as the need for rapid detection of the virus.

Germany's Health Minister, Hermann Gröhe, also highlighted the importance for the complete implementation of the IHR as well as for robust health systems. He stated that "fundamental" reform of WHO is necessary for it to be able to play its role as "guardian of health", as it is the "only international organisation with a legitimate policy". The Minister, whose country currently holds the presidency of the G7, stated that during its summit in Elmau (Bavaria) in June 2015, the G7 had committed to supporting 60 developing countries over five years in order to be better prepared for potential epidemics.