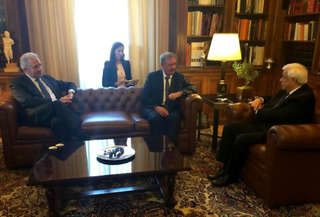 The visit was part of a two-day tour by the Minister and the Commissioner in Italy and Greece, the two countries that have been most affected by the migration crisis. The day before, they went to Rome Airport to see the departure of 19 Eritrean refugees to Sweden under the emergency relocation mechanism for 160,000 people. On the island of Lampedusa, they then visited one of the four operational "hotspots" in Italy (the first reception and administration centres for migrants).

Speaking at a press conference, Jean Asselborn stressed the importance of controlling external EU borders and registering persons entering into the Union. "Without rational and effective management of external EU borders, the Schengen area will fall apart", he cautioned. "If border controls are ineffective and people enter without being registered, almost all Member States will reintroduce internal border controls", he affirmed, with reference to the temporary reinstatement of border controls by Germany, Austria and Slovenia in September. Jean Asselborn noted that the previous Justice and Home Affairs Council (JHA) of 8 October "decided on shared European responsibility for the management of external borders". "This does not mean that Member State sovereignty will be diminished, but that help with external border management will be given to those who request it", noting that such help "is not military, but civil in nature".

The Minister noted that the adoption of the mechanism for the relocation of 120,000 individuals in need of international protection from Italy and Greece had to be "pushed through" and that "all 28 Member States must stick to the agreement". By way of reminder, the extraordinary JHA Council of 22 September 2015 approved the mechanism by qualified majority, against the will of a minority of States. By contrast, an initial relocation mechanism for 40,000 people had been approved unanimously at the Extraordinary JHA Council on 14 September 2015. In total, 160,000 refugees will be covered by the relocation mechanism.

The Minister also stressed the need to ensure the hotspots are fully operational "in the interest of Greece and the EU", failing which, the relocation mechanism will be ineffective. Jean Asselborn noted that asylum seekers will be "welcomed with dignity", but that we need to know "who is knocking at our door". He praised the fact that the first Greek hotsopt should be in operation "within a week to ten days", in Mytilene on the Island of Lesbos, praising the "exemplary cooperation" with the Greek Minister, Yannis Mouzalas. Apart from Mytilene, four other hotspots are planned for the Greek Islands. Jean Asselborn also announced another visit to Mytilene at the end of next week with Commissioner Avramopoulos in order to "offer support for the operation of hotspots".

The Minister stressed the EU's desire to support Greece, which requested financial and logistical aid for its migrant centres, adding that "no single country can bear the burden alone". He added that "while the road ahead will be long and difficult", "we are on the right track". Jean Asselborn said that he is convinced that Greece and the EU will come up with a road map "focused on helping, not some kind of dominion over Greek sovereignty by Brussels".

Fielding a question from a journalist on possible bilateral cooperation between Greece and Turkey, where many of the refugees coming to Greece arrive from, Jean Asselborn noted that he and others "support" and "would suggest" such cooperation, but that its establishment will depend on both countries and that there is no European plan for such cooperation. "I think that two countries located on both sides of an external border should work together", he affirmed. On 5 October 2015, the European Commission submitted its action plan on support for refugees and migration management to Turkey.

Speaking in Greek, European Commissioner Dimitris Avramopoulos stressed, echoing Jean Asselborn, that the relocation system will only work when the hotspots are up and running.

He stressed that neither Member States nor refugees will be able to choose the host country, the decision will be taken solely by the hotspot in its capacity as evaluation and distribution authority, where the asylum seeker is registered. "We have adopted clear and fair rules offering international protection while respecting EU migration policy", he noted. In his view, refugees need to be conscious of the fact that Europe "is welcoming in general" and that "all countries are participating" in the relocation effort, after the qualified majority vote.

The Commissioner went on to emphasise that this is a "European" issue, and that "Greece has not been left to fend for itself". He expressed the view that this crisis could have been avoided if the hotspots had been created earlier, but that "we are now making progress quickly". The Commissioner stressed that the reception and administration centres "are neither detention centres, nor reception centres"; they are a "mixed service" is provided, and the various agencies on the ground (Frontex, EASO, Europol and Eurojust) will ensure that "the fundamental rights of asylum seekers are fully protected" in cooperation with the national authorities.  Dimitris Avramopoulos further stressed that this crisis "is putting the institutions, European cohesion, and solidarity to the test". He further noted that 80% of migrants arriving in Greece are refugees entitled to international protection.

Yannis Mouzalas drew attention to Greece's commitment to meeting its obligations, while announcing that all five hotspots in the country will be operational "in one month". He mentioned that he had asked the European Commission to offer "faster solutions, particularly in financial terms" and to speed up bureaucratic procedures. The Minister called for the issue of Afghan refugees to be addressed; Afghan asylum seekers are recognised as such at a rate of 70% in the European Union, which remains below the rate of 75% accepted under the relocation scheme. He added that the Greek government "will support" requests from the Commission, but stressed the importance of the refugee relocation scheme from third countries, agreed by the JHA Council in July 2015, to "prevent people from drowning".