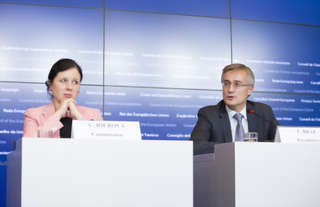 European Union (EU) Ministers of Justice met in Luxembourg on 9 October 2015 for the third session of the Justice and Home Affairs (JHA) Council devoted to matters relating to justice. Chaired by Luxembourg's Minister of Justice, Félix Braz, the Council agreed on a general approach to the draft directive for the protection of personal data processed for purposes of law enforcement.

The Ministers also adopted a partial general approach relating to a regulation establishing a European Public Prosecutor's Office. They discussed the accession of the EU to the European Convention of Human Rights (ECHR) and held a general debate on the migration crisis, focusing on aspects of judicial cooperation.

By way of reminder, the draft directive is part of the comprehensive data protection legislative package which was proposed by the Commission on 25 January 2012. The draft directive includes a general regulation in respect of which the Council adopted a general approach in June 2015.

In concrete terms, the proposed directive is aimed at "ensuring a consistent and high level of data protection for police and judicial cooperation in criminal matters, enhancing mutual trust between police and judicial authorities of the different Member States and facilitating the free flow of data", said Félix Braz during the press conference held after the Council.

The Minister was "delighted" to announce that the adoption of a general approach which will allow the trialogues to start with the European Parliament "at the earliest opportunity" and stressed that, as far as concerns the draft regulation, the trialogues were already "well underway". Therefore, the objective of  finalising the package, regulation and directive in December 2015, "although not a certainty, remains a possibility".

European Commissioner for Justice, Consumers and Gender Equality, Věra Jourová, observed that "the right to the protection of personal data is a fundamental right within the EU, it is our duty to ensure that it is protected as it should be".

In the same context, the Ministers referred to the "Schrems" judgment" of the Court of Justice of the European Union (CJEU) of 6 October 2015 and the consequences thereof on the transfer of data between the EU and the USA following the suspension of the "Safe Harbour" agreement.

Félix Braz referred to the judgment as being "particularly important for fundamental rights in Europe, with a significant economic impact" and declared that it was a "strong message to the world with regard to respecting the right to the protection of personal data in Europe".

In its judgment, the Court noted the truly important role played by independent national supervisory authorities, stated the Minister. The national supervisory authorities also called an emergency meeting in Brussels on 8 October 2015 to outline what happens next and to assist companies in implementing the judgment. "The 28 authorities need to respond in a coordinated, rapid and effective manner to the judgment", declared the Minister, who also stated that the objective of the Presidency to finalise the reform between now and the end of the year had been "strengthened" by that judgment.

Commissioner Jourová stressed the need for a "safer Safe Harbour" and set out three priorities: guarantee the effective protection of citizens' data during transfer thereof to the USA; guarantee the continuation of data transfers to the USA, in so far as these transfers constitute "the backbone of our economy"; and ensure coherence and coordination with national supervisory authorities.

The Presidency informed the Council of the EU's current progress concerning accession to the European Convention for the Protection of Human Rights and Fundamental Freedoms (ECHR). The Ministers then held a debate on the action to be taken in the light of the opinion delivered by the Court of Justice of the EU, which concluded that the draft accession agreement is not compatible with EU law.

By way of reminder, the Lisbon Treaty requires the accession of the EU to the ECHR. In June 2010, the Council adopted a negotiating mandate and an agreement was reach in April 2013. In July 2013, the Commission requested the CJEU to give an opinion on the agreement's compatibility with the EU Treaties. However, in an opinion delivered on 18 December 2014, the CJEU concluded that the draft accession agreement is not compatible with EU law.

Félix Braz observed that the debate confirmed that accession was "an important priority for the Luxembourg Presidency and for the Council as a whole". "Following a necessary period of reflection, the Presidency considers that the moment has come to make progress on the accession process", he stated, hence setting the agenda in that regard. He highlighted the fact that the EU's accession to the ECHR "will strengthen fundamental values" and "improve the coherence of protection of fundamental rights across Europe". "It will also strengthen the EU's credibility and “increase its accountability both internally and externally in terms of protecting fundamental rights", he said.

In that context, Félix Braz stressed that the Council had requested the Commission to submit a "detailed analysis" on the action to be taken in the light of the opinion delivered by the CJEU.

The Ministers reached an agreement on Articles 24 to 35 of the draft regulation. The articles, which are at the heart of the functioning of the future European Public Prosecutor's Office, establish rules for cross-border investigations, evidence, procedural rights of suspected and accused persons, closing the case without further action and confiscation. Félix Braz welcomed "the considerable step forward on this issue" and reiterated that the Presidency seeks a general agreement on Articles 17 to 37 in view of the JHA Council of December 2015, whilst stating that he is "aware that a conclusion is unlikely to be reached during the Presidency".

Commissioner Jourová stated that she would like to see the implementation of the European Public Prosecutor's Office in 2016. "It would enable us to make progress on our objective of zero tolerance in cases of fraud against the EU budget and to ensure the investigation and follow-up of all cases of fraud."

In that regard, the Ministers discussed the Directive on the protection of the EU's financial interests (PFI) which sets out, inter alia, the material scope and competence of the European Public Prosecutor's Office, pursuant to the CJEU's "Taricco" judgment of 8 September 2015.

According to Minister Braz, that judgment clarifies a contentious issue between the Council and the European Parliament, namely whether VAT fraud should be included within the scope of the PFI Directive. "I observed that the inclusion of VAT fraud in the directive garnered support from a large number of Member States", stated the Minister, which means that discussions with the European Parliament which are currently in stalemate can re-start. “The parameters surrounding such an inclusion are yet to be defined", he stated.

Judicial aspects of the migration crisis

Judicial cooperation and the fight against xenophobia in the context of the migration crisis were also discussed by Ministers, who sought to outline a number of possible priority actions in this field.

Firstly, it is necessary to make financial and human resources available to the authorities and bodies involved. Secondly, the operational capacity of Eurojust must be strengthened, in as far as that body "plays a key role in fighting against those who exploit the plight of refugees", stated the Minister.

Lastly, measures to fight against hate crimes and, in particular, incitement to hatred online must be taken at both European and national level. The Minister stated that steps taken by the Commission against Internet service providers, which largely focus on security (prevention of terrorism) must be supplemented by also focusing on the defence of the rule of law. "What cannot be tolerated on a protest banner cannot be tolerated online either", declared Félix Braz, adding that "Facebook and the Internet are not above the law".

That point will be addressed during the next JHA Council in December 2015.