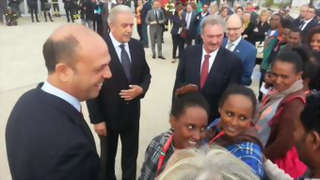 On Friday 9 October 2015, Jean Asselborn, Minister for Foreign and European Affairs and Minister of Immigration and Asylum of Luxembourg, accompanied Dimitris Avramopoulos, European Commissioner for Migration and Home Affairs, for the first 19 asylum seekers' departure under the new relocation scheme agreed by ministers in September. They addressed the press at Ciampino Airport of Rome accompanied by Italy's Interior Minister Angelino Alfano, a few minutes after the take off of the plane transporting a group of Eritrean refugees to Sweden.

As a reminder, the Council approved emergency relocation in two steps of a total of 160 000 people seeking international protection from Italy and Greece, on a proposal from the Commission. The Extraordinary  Justice and Home Affairs Council on 14 September 2015 adopted unanimously the Decision to relocate 40,000asylum seekers and the Extraordinary Home Affairs Council on 22 September 2015  agreed on the relocation of an additional 120,000 asylum seekers by a qualified majority.

"This plane represents a victory for European solidarity, responsibility and fundamental human rights", said Angelino Alfano. "During our Presidency, we will continue to do our best to meet the challenge of migration by providing a humane solution," assured Jean Asselborn. "Migration policy will give a new chance to these poor people who have suffered in recent months and years," he said, moved by the refugees leaving for Sweden. Dimitris Avramopoulos spoke of "a journey of hope" which is "a tangible and symbolic example of what we can do if we work in the spirit of solidarity" with which it has been possible to find a solution to the migration crisis.

"It took a real fight in the EU, and we even had to resort to a vote for an agreement on relocation", but thanks to this agreement the first flight took off, Jean Asselborn stressed. "Europe has assumed its responsibilities," he said. "It's a start" and our goal is to work towards a solution step-by-step".

"Implementation of the relocation scheme has begun", said the Commissioner. He said that the hotspots are set up as support teams composed of experts from the European Asylum Support Office (EASO), the European Agency for the Management of Operational Cooperation at the External Borders (Frontex), Europol and national authorities. These teams are responsible for the identification, registration and fingerprinting of asylum seekers. Then the relocation scheme can be implemented. It is based on the principle that all Member States have "welcoming to refugees" and asylum seekers must respect the rules, explained the Commissioner. "From the moment they are identified, refugees are aware they will have to go where they are directed. And those who refuse this procedure will not obtain refugee status," he said in response to the question of a journalist.