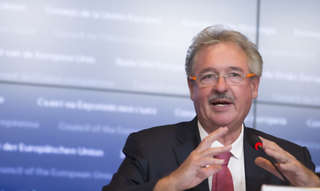 On 8 October 2015, European Ministers for Home Affairs met in Luxembourg for the JHA Council devoted to migration and chaired by Jean Asselborn, Luxembourg Minister for Immigration and Asylum. The Council adopted conclusions on the readmission and return policy which focuses on the operational elements and provides a detailed overview of future action to be taken. It also approved a migration financial package which aims to fast-track the release of 400 million euros in funding commitments. The Ministers also addressed relocation, the EU return policy and the management of the EU's external borders.

"Since the beginning of our Presidency, we have said that only by applying a logic of package, we will find a solution to the current migration crisis", declared Jean Asselborn after the meeting. He believes that we need "a collection of measures and actions which, if implemented in parallel, will yield results".

Ministers were informed by the Commission and the Italian and Greek delegations about the implementation of the decision adopted by the extraordinary JHA Council of 14 September 2015 to relocate 40,000 people needing international protection.

"In this context we have also spoken about the mobilisation of necessary resources in the form of national experts for the hotspots in Italy and Greece, that is to say the mobilisation of 670 additional personnel to be deployed by Frontex and 99 asylum experts to be deployed by the EASO, in order to carry out first reception tasks such as taking digital fingerprints, a first interview or interpretation", stated Jean Asselborn, adding that Ministers had expressed "their desire for rapid implementation".

"Relocation is only possible if the hotspots operate perfectly", continued Jean Asselborn, before announcing that on 9 and 10 October, he will travel to Italy (Lampedusa) and Greece with the European Commissioner for Migration, Home Affairs and Citizenship, Dimitris Avramopoulos, in order to review "progress on establishing the hotspots" and to identify the needs on the ground with the potential objective of accelerating their establishment.

"The first relocation plane with Eritreans is taking off tomorrow from Italy to Sweden", observed the Commissioner with satisfaction. "That means that the first hotspot system in Italy is operational already in Lampedusa", he said.

Jean Asselborn added that the roadmap implemented by Greece does not seek to "place Greece under supervision" but rather to help Greece, in particular in the light of its geographic location. "We hope that the Member States will quickly be able to carry out the first relocations on their territory", he went on to say.

EU return policy and management of the EU's external borders

Jean Asselborn explained that the return policy and the management of borders are the primary concerns of the Member States. "They are the conditions which, in the future, will enable progress to be made in a spirit of solidarity and will convince many States to move forward with a fairer sharing of the burden among all parties", he stressed.

The Commission submitted an EU Action Plan on return and a common Return Handbook to Member States. In that regard, the Council adopted conclusions on the readmission and return policy which focus on the operational elements and provide a detailed overview of action to be taken in the future. Adequate financial resources need to be allocated to increase the effectiveness the EU's return system with particular attention being paid to support Member States under strong migratory pressure. "It is a question of mobilising new money, additional personnel to be deployed by Frontex, the immediate creation of a dedicated European Return Office within Frontex, and the organisation of return flights directly by Frontex", explained Jean Asselborn. The Council also highlights the need to cooperate with countries of origin and transit.

"The conclusions also set out the more-for-more principle, creating a link between all policy areas; a pragmatic approach to readmission and the effective implementation of Article 13 of the Cotonou Agreement", added the Minister. In addition, the conclusions provide for the deployment of European Migration Liaison Officers before the end of 2015 in certain countries in Africa and in the Near and Middle East. 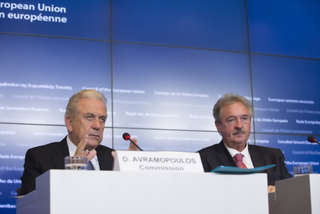 Dimitris Avramopoulos stressed the importance of making progress on the return policy. He highlighted the need of making better use of existing information exchange systems such as the Schengen Information System and Eurodac to develop an "integrated system of return management at EU level".

"We have always said that we need to protect those who need international protection but that, on the contrary, those who don't qualify for such protection will have to return to their countries of origin", observed Jean Asselborn. He takes the view that the readmission and return affect "the effective implementation of the relocation mechanism". It is an "integral part" of the instruments which seek to fight against illegal migration and, at the same time, to protect the integrity of the migration and asylum systems of Member States.

Nevertheless, Jean Asselborn warned that "neither relocation, nor a possible distribution solution with more lasting prospects can be effective if the management of external borders is lacking". Ministers exchanged views in order to analyse to what extent they are prepared to participate in a system of collective responsibility for external borders, despite the fact that the management of borders is "primarily the concern of the individual Member Sates".

"It is apparent from discussions this morning that the vast majority of Member States support a system of collective responsibility and strengthened management of external borders, and a majority of States also support substantially enhancing the mandate of Frontex", observed Jean Asselborn. Member States also stressed the importance of new technology to facilitate the management of borders ("smart borders").

"The future of the Schengen Area rests on the credible and effective monitoring of the EU's external borders", insisted Jean Asselborn, who referred to "a building site" in the context of the EU Agenda on Migration.

"This debate will fuel the next Commission proposal to be submitted before the end of the year", which will focus on "how we can share responsibility and involve all Member States" and which seeks to "create a new institution to better manage our borders", stated Dimitris Avramopoulos.

The Council was informed by the Presidency of the current state of progress in respect of the Commission's proposals on a regulation establishing a common EU safe countries of origin list, a regulation implementing an emergency relocation mechanism and amending the Dublin Regulation, decided at the extraordinary JHA Council of 14 September.

"As far as concerns the list of safe countries, all Member States agree that it is necessary to establish a common list, and the work will continue within the different formations of the Council, at the level of working groups", stated Jean Asselborn, before clarifying that some States have not yet decided their final position in that regard.

As for the permanent crisis relocation mechanism, the Minister explained that some delegations would prefer to wait for the results of the assessment of the temporary relocation systems, before continuing discussions on that proposal and adopting new measures. "Moreover, some delegations have found a link between that proposal and the future amendment to the Dublin III Regulation", stated Jean Asselborn.

The Council approves a financial package to help refugees

It also funds the creation of 120 new posts in the agencies: Frontex (+60), EASO (+30) and Europol (+30). "I welcome the approval of this financial package which allows us to take rapid action to implement our European policies, and to improve our response to the current crisis", stated Jean Asselborn.

Lastly, the Council focused on the connection between development and migration policies.