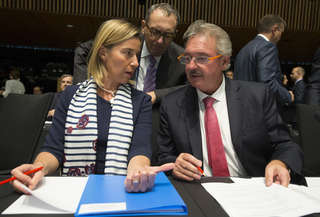 Jean Asselborn, Minister for Foreign and European Affairs, minister for Immigration and Asylum and Federica Mogherini, High Representative of the Union for Foreign Affairs and Security Policy, Vice-President of the Commission, convened this meeting, in order to discuss with all relevant partners the importance of this route in the increased migratory flows coming from the Middle East.

It was a joint meeting of Ministers for Home Affairs responsible for migration and asylum and of Ministers for Foreign Affairs, together with their counterparts from Turkey, Lebanon and Jordan, as well as from the Western Balkans (Albania, Bosnia and Herzegovina, FYROM, Kosovo, Montenegro and Serbia). Associated countries (Switzerland, Norway, Liechtenstein and Iceland) were also invited.

The key areas for discussion have been:

The high-level conference has adopted to adopt a declaration which aims for better cooperation among participants to face the 'common challenge we, as partners, will jointly face'.

At the press conference Jean Asselborn described the conference as a 'historic event because it is the first time that such a meeting is being held, to discuss the main migratory routes into Europe, including all countries along this route.' He stressed that 'this is only the beginning of a process, which should be based on a joint and long-term approach,' and added: 'The dialogue will continue in the months and years to come.'

Jean Asselborn highlighted the need to support 'the efforts of the first countries involved: on one side, the neighbouring countries of Syria, namely Jordan, Lebanon and Turkey; and on the other, the Western Balkans, a transit zone which is particularly affected'. He admitted that no single course of action prevails and that the situations are very diverse and that all possible scenarios should be taken into account in the quest for solutions and support needed.

He commended the great efforts of the neighbouring countries of Syria and also called for 'vigilance regarding the impact on the countries in question'. He recalled that the EU and the Western Balkans are linked 'by a strong, long-standing partnership as part of the enlargement, stabilisation and association process as well as by means of tools related thereto'.  The migrant crisis is therefore an 'opportunity for us to further strengthen our partnership with the region and intensify our cooperation on issues related to migration'.

The EU plans to support building and improving reception, urging them to stabilise the situation in terms of reception, of registration and by slowing down the migration flows.Cooperation with these countries is also necessary to organise 'legal migration flows to Europe' and though preventing 'migrants from resorting to the services of traffickers in human beings'.

Jean Asselborn also mentioned the Draft Action Plan on cooperation between the EU and Turkey submitted to the President Erdogan when he was visiting Brussels.  The minister stressed that, 'if this draft action plan depends on Turkey's acceptance of certain proposals, it is clearly also linked to the condition that all 28 EU Member States accept this plan. This shall therefore be further discussed within the Council and we expect a proposal to be made on the Council agenda.'

In conclusion, we must tackle 'the root causes of the current migrant crisis' and therefore 'strengthen our efforts in particular to find political and diplomatic solutions to conflicts that drive civilians to flee and seek refuge away from home,' such as the conflict in Syria and 'give priority to the fight against poverty and against inequality.' He added that military action will not bring about more security in conflict areas.

'A global approach should be adopted towards the migrant crisis and we must act on several fronts at the same time as the reasons for the migration and its possible solutions have effects that interact betwen each other. Therefore, the meeting tonight with third countries particularly affected constitutes one more reason to find solutions,' said Jean Asselborn.

Federica Mogherini also spoke of a 'very important conference', and 'teamwork at its best' in as much as there are 'people, managers and tools needed to tackle the issue around the table'.

The High Representative believes, 'it is time for us to realise that our burden has to be seen in relation to the burden that the neighbouring countries of Syria are facing.' In addition, we should not forget the other routes, such as the South that will be discussed at the Valletta summit.

The Conference on the 'Eastern Mediterranean – Western Balkans Route' flagged up the need to ' 'start a political process to put an end to the war in Syria'. We must support neighbouring transit countries, the fight against human trafficking, improve police and judicial cooperation with the Western Balkans and discuss with the migrants' countries of origin the return of their citizens.