The EU can only confront "the current troubles in the Middle-East in cooperation with its partners, particularly Turkey", explained Nicolas Schmit 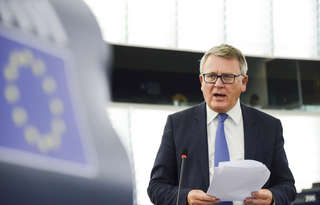 Speaking before the MEPs, Nicolas Schmit stressed that the EU can only confront "the current troubles in the Middle-East", in particular the Syrian crisis, the presence of Daesh in Iraq, the human tragedies in the Mediterranean and terrorist threats, in cooperation with its partners, particularly Turkey, "a strategic partner for Europe". "We share many common interests with Turkey, beginning with the most important – peace and stability in our respective regions," he indicated.

For this reason, the EU has decided to "strengthen and deepen its engagement with Turkey," the Minister explained. According to Nicolas Schmit, the high-level dialogue between the EU and Turkey is in the interest of both partners, with a view to confronting "the same regional challenges".

Nicolas Schmit explained that "the situation in Syria and Iraq has provided the impetus to strengthen our cooperation on foreign policy issues and the fight against terrorism". He drew attention to the efforts made by Turkey in hosting 2 million refugees both Syrian and Iraqi, which should elicit "admiration, support and solidarity from the EU". "The challenges we face due to the refugee crises have made it necessary to strengthen our cooperation on migration and border management," continued Nicolas Schmit. The Minister expects that such cooperation will strengthen the dialogue with Ankara with a view to the introduction of a more liberal visa regime.

"We should also further develop operational cooperation with a view to preventing illegal migration in the Aegean Sea and in the Mediterranean and combatting trafficking networks," Nicolas Schmit continued.

Such was the backdrop for the meeting held on 5 October 2015 between the President of Turkey, Recep Tayyip Erdoğan, the President of the European Commission, Jean-Claude Juncker and the President of the European Council, Donald Tusk. Jean-Claude Juncker submitted a draft plan of action to Recep Tayyip Erdoğan on support for refugees and migration management with a view to intensifying cooperation between the EU and Turkey. "This draft plan of action is currently under discussion with a view to coming to agreement on the details," Nicolas Schmit explained.

"Turkey is a candidate country for accession, as well as a strategic partner of the EU in the region"

"However, our challenges with Turkey go beyond those aspects," stated Nicolas Schmit. From his perspective, a stronger political dialogue between the EU and Turkey, along with accession negotiations, would facilitate joint cooperation on key issues of mutual interest." Turkey is a candidate country for accession, as well as a strategic partner of the EU in the region," the Minister stressed, before calling on the EU to focus its work with Turkey on these two parallel dimensions.

Regarding the domestic political situation in Turkey, Nicolas Schmit expressed concerns regarding "escalating violence in Turkey" and "continuing terrorist attacks". He stressed that "the measures taken by the government should be proportionate, targeted and should not threaten democratic political dialogue". He also emphasised the importance of the peace process with the Kurds and expressed his wish to see Turkey form a new government following the parliamentary elections on 1 November 2015. Finally, he called on Turkey to strengthen democracy and the rule of law in order to prove "its strong commitment" to the EU accession process.

As regards Cyprus, the Minister took the view that "the conditions for a positive solution are in place".

Concluding his speech, Nicolas Schmit stressed that the EU and Turkey "need each other". "We do not have the same position on every issue, and must therefore intensify our discussions in order to develop shared policies and frameworks for our crucial partnership," stated Nicolas Schmit.

During the debate that followed, all the main political groups stressed the need to strengthen cooperation with Turkey in order to manage migration. However, a number of groups expressed their concerns regarding the failure to respect democratic values in Turkey, evoking minority rights, human rights and freedom of the press. On this basis, German MEP Alexander Graf Lambsdorff (ALDE) expressed the view that Turkey should not be considered as an EU accession candidate, but rather a "strategic partner", where "pragmatic" cooperation is appropriate.

In his response, Nicolas Schmit again stressed the importance of cooperation with Turkey, given "the growing importance of our shared interests and challenges: foreign policy, trade relations, cooperation on the fight against terrorism, cooperation on mobility and migration, and our dialogue on energy issues". From his perspective, the EU must "play its role".

"I remain convinced that it is crucial to engage frankly and patiently with Turkey on the rule of law and fundamental freedoms, as part of the accession negotiations," Nicolas Schmit added. In his view, the best way to engage constructively with Turkey on these issues is to "open new chapters" and to "offer Turkey a clear road map for reforms in line with EU standards".