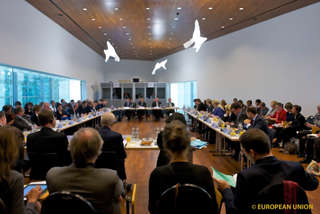 The Luxembourg Presidency of the Council of the European Union held for the first time on 5 October 2015 an informal meetingwith the 19 Ministers for Employment and Social Affairs of the eurozone. The meeting took place before the EPSCO Council meeting in Luxembourg. The goal of the meeting was to hold discussions, based on a background note submitted by the Presidency, on strengthening the social dimension in the governance of the Economic and Monetary Union (EMU) which is facing increased social divergence, and to evaluate the added value of such a restricted meeting. The Minister for Labour, Nicolas Schmit, and the Minister for Social Security, Romain Schneider, chaired the informal meeting.

During his introduction, Nicolas Schmit explained that the euro area countries, which share the same currency, are facing "specific common challenges" and share "the "same interests and responsibilities". EMU implies "greater solidarity and stronger convergence", said Nicolas Schmit. But the financial crisis highlighted some "inadequacies and setbacks" in the governance of the eurozone. "The process of strengthening EMU is far from complete, as it has indeed only just begun", stated the Minister.

Nicolas Schmit spoke about economic and social heterogeneity in the eurozone, "which is already quite significant", but could likely increase in significance and "affect the EMU's legitimacy". He then stressed the need to include an enhanced social dimension within the EMU, as "provided for in the Treaties". He stressed that "without this social dimension, EMU cannot contribute to convergence". For the Luxembourg Presidency, "upward convergence" is essential for the EMU to succeed.

According to Nicolas Schmit, the EPSCO Council should be "a player comparable to" others such as the Eurogroup and Ecofin, "not in a competitive spirit", but in a "fair manner" in order to complement EMU".

As highlighted in the Five Presidents’ Report, which submitted a project for the strengthening of the EMU, the Luxembourg Presidency has drafted several questions. The report proposes to formalise the convergence process, which would be based on a set of jointly formulated criteria or benchmarks. It also acknowledges the importance of labour markets social protection systems which "should function properly and in a fair manner in all Member States of the euro area "to ensure the success of EMU".

The following were the Presidency's questions:

The positions of the national delegations 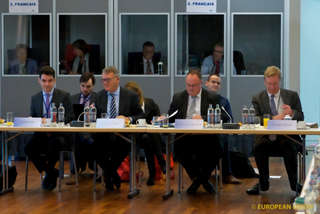 While the national delegations welcomed the initiative launched by the Luxembourg Presidency to convene this meeting, their positions have nonetheless differed in many aspects.

Several national delegations stressed the added value of such a restricted meeting within the context of extending the governance of the EMU. A delegation from a large Member State even spoke of an "essential step taken today". These delegations believed that a "social Eurogroup" model would enhance the EU's and eurozone's social dimension and prevent a downward trend in social rights, salaries and social protection from occurring in them. The goal of this "integrated" approach is not meant to create an "exclusive" or "restricted" club by separating euro area Member States from non-members, but rather to facilitate the emergence of new ideas to strengthen the social pillars of the euro area and to allow for upward convergence of social systems.

One of the delegations also drew attention to the fact that in the adjustment program, his country is obliged to bring its employment reforms into line with the best European practices. The Finance Ministers and not the Employment Ministers currently determine what are the best practices, she pointed out.

Other delegations stressed the importance of not creating a parallel decision-making process that would exclude non-euro area Member States from discussions on the EMU social dimension. They appealed for these States to be able to participate in the informal meeting of the euro area EPSCO Ministers  on a voluntary basis. One of these delegations stated that excluding non-euro area Member States would prevent them from benefiting from their experience and expertise in terms of social policies.

Lastly, other delegations expressed their scepticism on the added value of a "social Eurogroup". According to the delegations, although the discussions in this form may be useful, they are opposed to the idea of continuing with these meetings, as they believe that social policies can best be discussed and assessed by all EU Member States. According to them, rather than trying to set up new instruments, the EU should consolidate and make the instruments and structures it has available more effective. The exchange of best practices should enhance social convergence in the EU and the euro area. They also discussed the importance of increasing labour mobility.

One of these delegations warned against the risk of "dividing Member States" and spoke against "harmonising" social policies, citing the "significant differences" in this area.

Thirdly, the Minister explained, "social harmonization is not our sought-after goal, especially as it is not foreseen in the European treaties.  The differences between the social systems of Member States are such that there cannot be a solution for all. Convergence is essential for the success of EMU.  Convergence must be financial, economic and budgetary, as well as social."

His last statement was political. "There is very strong pressure which is hostile to the EU and the euro; and this gives rise to the euro being perceived as a mere instrument of budgetary discipline which is not always adequate, while the real goals are growth, employment and social protection. Yet, if this message is not transmitted and the European project is not supported by its citizens, the EU will have setbacks."

Nicolas Schmit admitted that "we do not have consensus on this model of EPSCO ministers of the eurozone, but the discussions were fruitful, and should be reopened from time to time to lend a social dimension to the euro zone which is not always apparent". To the extent that "the Eurogroup discusses what affects us directly, our contributions should be harmonised, otherwise EMU will not be conferred a social dimension at all".

The Luxembourg Minister for Social Security, Romain Schneider, followed suit, saying that "we are all concerned about maintaining our social protection systems" and called for "enhanced coordination of governance" which affects economic, financial and social policies. "The policies for which we are responsible should not merely be treated as adjusted variables".  He concluded by making it clear that the EU Member States which are not part of the euro area would not be isolated by the proposal of the Luxembourg Presidency and that real added value should be provided and the current preparatory committees included in the process, and finally pinpoint the topics to be tackled more effectively and find "the best model".