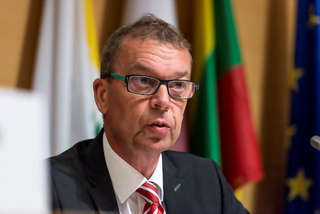 Members of the Executive Bureau of the European Committee of the Regions (CoR) met in Luxembourg on 2 September 2015 at the 162nd meeting of the Bureau committed mainly to cross-border cooperation. On this occasion, the Secretary of State for Sustainable Development and Infrastructure, Camille Gira, was invited to present the proposals of the Luxembourg Presidency of the EU Council, which has submitted an opinion request to the CoR on the need for a better regulatory framework for cross-border cooperation. The subject was then discussed at two round tables, the first committed to cross-border issues relating to EU policy and regulations, the second to investment and financing of cross-border projects.

During the opening debate, CoR President Markku Markkula, pointed out that, even though cross-border cooperation had taken on a new dimension in recent decades, many challenges remained. While the principle of simple cooperation evolves towards that of a more functional and coherent integration of the territories, the importance of cities and territories will increase and "have specific consequences". Within this framework, "it will be essential to better understand these regions, cross-border interactions and potential", said the president. He stated that it would also be necessary to "share common visions, thus going beyond the national perspectives, and to provide the necessary financial resources".

The Greater Region: an "example of institutionalized cross-border cooperation"

The Secretary of State for Sustainable Development and Infrastructure, Camille Gira, stressed the importance of Luxembourg's long-standing commitment to cross border cooperation. He believes that for a "small country" such as Luxembourg, cross-border cooperation is "more real" than for a big country. "All decisions taken in our neighbouring countries have a direct impact on many topics in our country, but the reverse is also true", emphasised the State Secretary.

"We have been implementing institutionalized cooperation with France and Germany since 1971", he further explained; cooperation was then extended to include other territories, other levels of government and to Belgium in order to become the "Greater Region". "The chief executives of the countries and regions of the Greater Region meet regularly; we have an inter-Parliamentary Council and, following the EU's example, we have an economic and social committee", he said. According to Camille Gira, one of the characteristics of the Greater Region is the "interdependence of its border areas" and the large number of cross-border commuters. "For Luxembourg alone, the number is 170,000 people representing over 40% of the Luxembourg labour market", he stated. In terms of the Greater Region as a whole, "the number of cross-border workers amounts to 220,000, which is over a quarter of all EU border commuters".

Within this framework, it is not surprising that cross- border cooperation occupies "a significant place" in the programme and activities of the Luxembourg Presidency of the EU Council, he added. Although cross-border cooperation in itself does not fall within the EU's competence, he believes that the EU has "an important role to play in bringing citizens closer together in the border areas" and "in rejuvenating border areas that have traditionally suffered from their peripheral location". This can be seen, for instance, in the creation of "structures such as EGTC" (European Grouping of Territorial Cooperation), as well as in the "cooperation designed to implement European regulations whose effects do not stop at borders", for example, in the environmental field and Natura 2000 areas.

Proposal of the Luxembourg Presidency: develop tools to boost cross-border cooperation next to the EGTC structure

In its proposal, the Luxembourg Presidency intends to consider a new "pragmatic instrument", a legal framework to "boost cross-border cooperation" by adopting specific legal provisions for border areas. This proposal was submitted for approval to the CoR, which will provide a report on the issue at the October plenary session.

During the debate, the first vice-president of the CoR, Karl-Heinz Lambertz, stated that, although the disappearance of borders had fostered mobility and the removal of certain barriers in Europe, it had also raised new problems. "As mobility increases, the incompatibility of laws, mentalities and languages becomes more evident, and we will be faced with a mountain of difficulties". According to him, harmonization, which many believe has already gone too far, "will not solve everything in Europe; diversity is also necessary and there are differences that we must learn to manage". "The great art" of cross-border cooperation is after all to "find solutions", he said, quoting the example of the introduction of the EGTCs in 2004.

"It is no longer just a question of solving problems, but of coming up with integrated solutions". According to him, the proposal of the Luxembourg Government is not however aimed at further harmonising legislation at European level; on the contrary, it provides a "novel solution" by creating a legal framework that would facilitate the decision-making of national States, so they themselves can better create provisions that allow cross-border cooperation".

The rapporteur for the opinion on strengthening cross-border cooperation, Nikola Dobroslavić, recommended to be "cautious" by developing a new instrument, while current tools "must be fully implemented and evaluated". In particular, he pointed out that the Regulation relating to the EGTCs was the subject of a review in 2014. "The potential of the EGTCs must be fully exploited, but if it cannot achieve its objectives, then it will have to use other instruments".

After the debate, Camille Gira replied that "even maximising the potential of the EGTC will not help to overcome borders". According to the Minister, Luxembourg EGTCs all fall under a cooperation, which he described as "software", but "as soon as any infrastructure whatsoever needs to be built, several problems arise". He cited the example of a Luxembourg mayor who wanted to build a wastewater treatment plant with his neighbour on the other side of the border. "If you know that this construction is destined to become the subject of a contract between Germany and Luxembourg, then you will no longer want to take the initiative or embark on the project", lamented the Secretary of State. Within this framework, the instrument proposed by the Luxembourg Presidency would enable the Luxembourg municipality in question to build a wastewater treatment plant in line with Luxembourg standards, while the neighbouring town could be restricted to "appealing to Berlin for this specific type of plant. German standards would not need to be applied, but Luxembourg standards would".

According to Camille Gira, this instrument respects the principle of subsidiarity and would facilitate cross-border cooperation. "If we want to bring Europe closer to citizens, we need concrete results", he concluded.