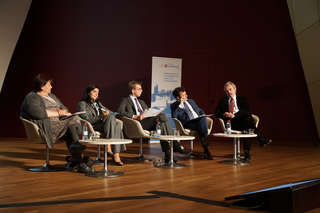 After a first round table devoted to geoblocking, the second part of the Consumer and Competition Day, held on 21 September 2015 in Luxembourg, focused on online platforms and their role as "marketplaces". Such platforms, the importance of which is found to be growing for the future digital single market, fulfil a variety of functions (online shops, social networks or price comparison sites) but raise questions about their nature (retailers, intermediate service hosts), their liability in the case of disputes and possible distortions of competition.

On this subject, Dr Rainer Metz, Director in the German Federal Ministry of Justice and for Consumer Protection, highlighted the growing role of these platforms, whilst also underlining their "lack of transparency" in terms of liability and applicable law. He takes the view that although they offer consumers many advantages - for example, in terms of a wider selection of prices and offers or better information - they also involve a certain amount of risk, especially with regard to a dominant market position. He also underlined that a proper enforcement of the law was necessary and that local authorities are often out of their depth.

Siada El Ramly, Director General ofEDiMA, the European trade association representing online platforms, indicated that these platforms were not new concepts but an adaptation of existing market practices to the digital environment and globalisation. These developments have helped to save time and offer consumers greater choice and transparency, as well as improved market access to SMEs, she explained, noting that the platforms were subject to major regulatory constraints. With the European Commission preparing to launch a public consultation about these online platforms in September, the Director General believed that this exercise would help to "answer certain questions" and to see "if there really are problems that need to be solved".

Despina Spanou, Director of the Commission's DG for Justice, specified that this consultation would seek to identify market practices in a rapidly evolving market. These platforms can "really be tools which contribute to unlocking the potential of e-commerce", she believes, noting that they have the potential to "attract more consumers and companies online in a very 'friendly' manner, in particular for SMEs". She also disputed the existence of a legal void in this field but recognised that a problem did exist in terms of the enforcement of laws and their interpretation. "It is very important to apply existing laws which work well", she reiterated.

Thierry Dahan, Vice-President of the French Competition Authority, highlighted the fact that competition authorities are not competent in matters beyond the scope of competition law, and that the challenge lies in reformulating complaints submitted by consumers in such a sense. He believes that online markets are not the same as traditional markets, which "are public spaces that do not pose any problems in terms of market, access, competition", he explained, questioning the "neutral character" of access to online markets. The other difference lies in the presence of "genuine suppliers" on ordinary markets "which buy in order to resell and which take risks", but this is not always the case online "where we sometimes find pure intermediaries which may, therefore, be in a privileged situation". "This example demonstrates the spirit in which these cases can be dealt with by bringing the market in line with familiar concepts, shown here with problems of abuse of a dominant position", he added.

Clarifications are required for the collaborative economy

The speakers then considered the need to provide the collaborative economy (such as transport services provided by private individuals for private individuals, etc.) which generally operates using online platforms, with specific legislation. Thierry Dahan observed that this type of market "does not exist" for competition authorities, given that it is not an actual economic activity "in the legal sense of the term". When they start to grow, it becomes an informal economy and cash-in-hand work, which raises questions with regard to taxation, he explained. As for judgments handed down in this field, he pointed out that case-law varies between Member States. Despina Spanou underlined that, for the Commission, the matter of taxation needs to be "clarified", as does that of compliance with rules and responsibilities.

The Commission has to adopt a surgical approach

During the second part of the conference, the Chair of the European Parliament's Internal Market and Consumer Protection Commission (IMCO), Vicky Ford (ECR), stated that a functional single market was "the key to freeing growth and creating jobs". In this regard, the MEP believes that the Commission should focus on solving problems where action is needed, observing that harmonisation may lead to a loss of quality. Moreover, it is important not to add to bureaucracy, she insisted. Companies "ask for transparency" with regard to the legislation imposed on them, "it is important to listen to what they have to say", she continued. And they can grow only if "they work hand-in-hand with the consumer market".

Finding the balance between the different interests at stake

In conclusion, François Biltgen, former Luxembourg Minister of Justice, now a judge at the Court of Justice of the European Union, stated that in the context of the digital single market, different interests were at stake and that a balance must be found. In particular it is for the institutions, including the judge, to strike this balance and to ensure consistency in the uniform interpretation of the law, he said, although great tension exists, especially in the scope of the law applicable to cases of cross-border supply.