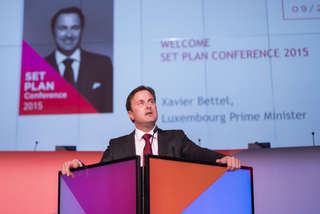 The 8th SET-Plan Conference was held in Luxembourg on 21 and 22 September. The goal of the conference is to strengthen the work of the European Strategic Energy Technology Plan (SET-Plan). It sets the framework to deepen the debate on how to accelerate the energy system transformation through research, in order to make the European energy sector more competitive. Adopted in 2007, SET-Plan aims to accelerate the development and deployment of low-carbon technologies while bringing down costs.

During the opening session, Prime Minister Xavier Bettelstressed the importance of accelerating the energy transition He drew attention to the fact that the EU imports half of the energy it consumes and that some 500 billion euros are drained out of the economy every year just to pay the fuel and gas bills, instead of being invested in research.

Energy dependence, especially dependence on energy derived from fossil fuels, is a major cause of climate change, the Prime Minister reiterated, and restated the Luxembourg Presidency's commitment to reaching a binding global agreement at the UN Conference on Climate Change (COP21) in Paris in December 2015, with the goal of keeping global warming levels below 2 degrees.

The energy system of the future will have to be based on renewable energy, on energy efficiency and smart and flexible technologies, outlined the Prime Minister, considering that the energy transition has significant potential for growth and employment. Xavier Bettel also insisted on the necessity of bringing Europe back to its role of global industrial leader in renewable technologies and implementing the principle of Energy Efficiency First as a key priority.

Carlos Moedas, European Commissioner for Research, Science and Innovation, said in his speech that energy, research and innovation are major priorities for the President of the European Commission, Jean Claude Juncker. If the Energy Union is based on a "strategic approach to innovation", it may represent a similar opportunity to that of electrification in the 19th century, emphasized the Commissioner, who explained that research innovation is one of the five dimensions of the EU Energy Union strategy.

As for SET-Plan, Carlos Moedas believes that it should ensure innovation is central to the Energy Union and strengthen investment and innovation. According to the Commissioner, SET-Plan should be a "real motivator" and a "dynamic part" of the Energy Union.

While the EU is "well positioned" in the areas of knowledge and industry, it is lagging behind in infrastructure and investment, the Commissioner reiterated, calling for investment in research and innovation and finding the right balance between long-term economic growth and environmental sustainability.