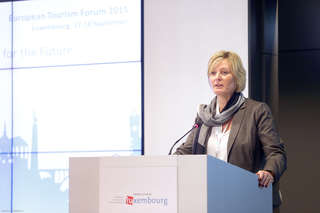 On 17 and 18 September 2015, the 14th European Tourism Forum was held in Luxembourg, an event organised by the European Commission in the context of the Luxembourg Presidency of the Council of the European Union (EU). For the 2015 edition of the European Tourism Forum, the speakers chose to focus on the important issues the tourism sector is facing today: digitalisation, promoting Europe through transnational and pan-European thematic products, skills and training and also streamlining the regulatory and administrative framework. Francine Closener, Secretary of State for Economy, delivered the welcoming remarks of the forum "intended to shape the future of European tourism" to representatives from the public and private sectors.

Francine Closener: working together to address the challenges that tourism is facing

Observing that tourism is an "extremely dynamic" economic sector and a real "driving force of economic growth", Francine Closener stressed that it also faces "many challenges". "If Europe wants to keep its position as the world's top tourist destination, you have to work together in order to face these challenges", she stated, referring to digitalisation, promotion, skills and training and even visa policies. "We have a common interest in exchanging ideas and experiences", stressed the Secretary of State, regardless of the fact that tourism is not an EU policy area.

Observing that Europe is made up of various destinations, Francine Closener added that it is this diversity that gives Europe its strength. "Of course, there is competition between European destinations and that will never change, but we must find common ground to work together in order to promote our territories", following the "very successful" lead of the United States or Australia, she noted. This could be done by Member States, suggested the Secretary of State, calling for the Commission to "set the pace".

Slawomir Tokarski: tourism is one of the few sectors that continues to grow despite the recession

Slawomir Tokarski, Director of the European Commission's Directorate General for "Growth", stressed that tourism was one of the few sectors that continued to grow despite the recession, today representing 12 % of European GDP and employing 12 million people of which more than 20 % are aged under 25 years. Tourism also has implications for other sectors, the speaker noted, citing the fashion industry and the cultural, agrifood, transport and public works industries. But tourism is also facing a number of challenges, he added, such as increasing global competition, the digital revolution and an ageing population. "It is time to address these challenges and see how we can make them benefit the tourism sector, the economy and consumers."

The Chairman of the Committee of Transport and Tourism of the European Parliament, Michael Cramer, then took the floor to advocate cycle tourism at a time when transport is responsible for 24 % of CO2 emissions in the EU and such emissions have increased by 28 % in this sector since 1990. "We must change our approach to mobility to stop climate change", he said.

He welcomed the EU Strategy for the Danube region and its equivalent for the Baltic Sea region, especially with regard to cycle paths. The MEP was pleased to say that "for 20 years, cycle tourism has increased by 20 % each year in these regions", adding that cycle tourists spent more on average (EUR 35 per day) than holidaymakers who travel by car (EUR 10 per day). He believes that cycle tourism therefore not only benefits ecology, but also the economy. And with its 15 EuroVelo cycle paths across Europe that span 80,000 km, each year cycle tourism brings EUR 44 billion to the EU and employs 700,000 people, stated the speaker. "Projects in this area are funded by up to 85 % by the European Commission and all proceeds go to the regions", he said.

In conclusion, Taleb D. Rifai, Secretary General of the World Tourism Organization, sent a video message to the forum participants. In particular, he observed that the tourism sector was growing worldwide for the 5th consecutive year: in 2014, 1.1 billion tourists travelled around the world (4.3 % more than the previous year) generating USD 1,300 billion. In particular, tourism increased by 3 % in 2014 in Europe, generating EUR 445 billion. "For many Member States, tourism is the key to job creation and exports", he added. Today, Europe is the most visited region in the world: it welcomes more than half of tourists worldwide and in 2030 this figure will rise to 745 million people, Taleb D. Rifai added. "But the long-term competitiveness of the sector will depend on what measures are implemented today so that it can adapt to market developments", he concluded.