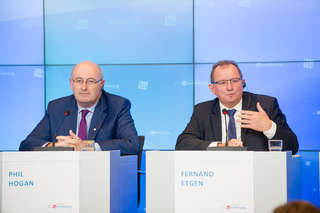 On 15 September 2015, during an informal meeting of Agriculture Ministers in Luxembourg, ministers continued discussions underway during the extraordinary meeting of Agriculture Council of 7 September 2015 on the European Commission's 500 million euro package of support measures earmarked to help farming sectors in difficulty, following the demand of Member States to get more details on forthcoming aid.

The European Commission had not yet defined national envelopes when it had presented its package of support measures on 7 September, but restricted itself to stating that the envelopes would be shared out in an "equitable, targeted and efficient manner", paying particular attention to the Member States most affected by market developments.

The ministers "stressed their concern for the farming situation and in particular the dairy and pigmeat sectors" and "confirmed their willingness to mobilise all available instruments for these sectors which are essential to the European economy", explained Luxenbourg Minister of Agriculture and Chairman of the AGRI Council, Fernand Etgen, after the meeting.

"On the whole", the ministers "warmly welcomed the package of measures announced by the Commission as a first response to this situation" and "have taken note of the clarifications provided by Commissioner Hogan on implementing the package of measures", explained Fernand Etgen, before adding that "certain Member States" had nevertheless "showed their discontent over various aspects of the measures proposed".

Regarding targeted measures, 420 million euros out of a 500 million euro package of measures from the Commission will be directly earmarked for Member States, according to a distribution taking into account levels of milk production and short-term impacts such as the Russian ban or drought. This distribution will also take into consideration the difficulties of farmers in the Member States which have been particularly affected by the falling price of pigmeat or by the falling price of dairy products, as the European Commissioner for Agriculture and Rural Development, Phil Hogan, explained during a press conference after the informal Council meeting.

This tranche of the Commission's 500 million euro package could be paid in mid-October, whereas the remaining 80 million euros are allocated as market support measures.

Phil Hogan stated that the European Commission decided to agree on "a maximum flexibility" to Member States on the manner in which they will allocate this aid to the different sectors affected by the crisis.

Regarding the possible advanced CAP payments agreed by each Member State for farmers, Phil Hogan indicated that the Commission would relax controls to allow advance up to 70 % from mid-October. Member States can pay these amounts after administrative checks have been made. "Farmers can thus receive the cash before the end of the year", the Commissioner noted positively.

Lastly, Phil Hogan addressed the measures on rural development, which, according to him, would enable "money to be supplied to the farmers".

Regarding private storage aid, that will also now cover fresh lard on the pigmeat market, while a new programme will be put in place for skimmed milk powder, increasing financial aid by 100% and extending the shelf life of private stock.

"We will also take promotion measures and we want to be more hostile concerning commercial openings to win new markets and sell our European products", added Phil Hogan.

Furthermore, around 30 million euros will be earmarked for a programme aimed at ensuring the distribution of European milk to refugees. " This money will be allocated to the different charitable associations working with the European Commission's Humanitarian Aid and Civil Protection service (ECHO) to deal with the refugee crisis", the Commissioner explained.

Regarding advance payments, Fernand Etgen stressed that ministers recalled "the flexibility needed for on-the-spot and administrative checks in this first year of the CAP". "Along the same lines, certain Member States recalled the need to simplify the arrangements governing aid payments ", he added.

Furthermore, certain States requested an assessment of the implementation of measures to be carried out in the forthcoming months as well as close monitoring of market developments. "The Council will have the opportunity to report back in the coming months", the Minister stated.

"Many States" further stressed the "importance of the work envisaged on the food chain and to achieve it as soon as possible", Fernand Etgen reported.

"Without calling into question the market-orientation of the CAP, certain States think that these measures should be extended regarding certain structural aspects for the milk and pigmeat markets", Fernand Etgen indicated.