European Ministers responsible for Home Affairs or Immigration met in Brussels on 14 September 2015 for an extraordinary session of the Justice and Home Affairs Council devoted to the European Union's response to the current unprecedented levels of migratory movements and the refugee crisis it is currently experiencing.

This meeting, chaired by Jean Asselborn, Minister for Immigration and Asylum, was convened by the Luxembourg Presidency of the Council of the European Union in order to take stock of the situation on the ground and to discuss the next steps to be taken to reinforce Europe's response. The Ministers established "an agreement in principle" on the proposed emergency relocation of 120,000 people in need of international protection, without going into detail about how these people will actually be distributed between Member States.  The JHA Council also formally adopted its decision concerning the relocation in the EU of 40,000 asylum seekers who have arrived in Greece or Italy.

The Council formally adopted the "temporary and exceptional" mechanism for the relocation of 40,000 asylum seekers.

During the press conference held after the meeting, Jean Asselborn reiterated that Europe was facing its greatest challenge since the Second World War, "in particular because this is about men, women and children", therefore, with the Council's objective being to "find solutions". 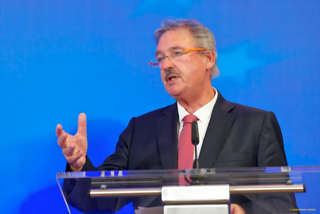 In this respect, the Minister specified that the conclusions made public following the Council were "the conclusions of the Presidency", not of the Council, although they are "supported by a large majority of Member States". "The Presidency has attempted to outline operational conclusions, firstly decisions that need to be taken to receive the people coming in, and secondly decisions needed to deal with future arrivals", highlighted Jean Asselborn.

In this context, the JHA Council confirmed the general position adopted during its previous extraordinary meeting of 20 July 2015 by formally adopting its decision concerning the relocation mechanism provided for in the European Agenda on Migration submitted by the European Commission in May 2015. This provides, in particular, for the relocation throughout the EU of 40,000 asylum seekers who have arrived in Greece or Italy, and the implementation in frontline Member States of first-reception and registration facilities (known as "hotspots") intended, in particular, to sort people eligible to receive refugee status from "economic" migrants.

The Ministers' decision therefore establishes a "temporary and exceptional" mechanism (to last two years) aimed at "people who have an obvious need for international protection", who will be distributed from Italy and Greece to other Member States on a voluntary basis, as recommended by the European Council of June 2015. As agreed on 20 July, the agreement covers the distribution of 32,256 people, with Member States undertaking to update their contributions in December 2015 to reach a total of 40,000 people, in accordance with the commitment made by the European Council.  "The initial relocations may, nonetheless, be implemented on the basis of existing figures", explained Asselborn, who highlighted that the Presidency was expecting new commitments "as soon as possible".

This decision will make it possible to start the first relocations and to guarantee the formal establishment of "hotspots", which already have "the legal basis they need to operate", declared Jean Asselborn. He specified that they were "a condition and a prerequisite for the relocation mechanism". The Minister was pleased with this "very important political message", highlighting that, although the Council is looking at an additional emergency relocation system, "it is very important to ensure that the initial relocation system is put in place and starts to take effect".

"A large majority of Member States" established "an agreement in principle" on the proposed emergency relocation of 120,000 people

Nonetheless, the agenda was dominated by future priority actions, with Ministers debating the new measures put forward by the President of the Commission Jean-Claude Juncker during his State of the Union address at the European Parliament on 9 September 2015.

He notably put forward a new proposal for the emergency relocation of 120,000 refugees from Greece, Hungary and Italy, a draft  permanent relocation mechanism for all Member States (which the Commission can implement at any time to help any EU country in a crisis situation), as well as a proposal concerning the establishment of a shared EU list of safe countries of origin designed to speed up the processing of requests for international protection.

In this respect, "a large majority of Member States" have established "an agreement in principle" on the proposed emergency relocation of 120,000 people in need of International protection, explained Jean Asselborn, but the actual distribution between Member States was not specified. The European Commission is proposing a system of mandatory quotas which has met with opposition in several Member States, in particular the countries referred to as the "Visegrad Group" (Hungary, Poland, Czech Republic and Slovakia) and Romania.

Noting that this text has only been before the Council since last week, Jean Asselborn commented that "even though we are in an emergency situation, we must, nonetheless, respect the appropriate procedures". The text needs to be analysed in detail by the Council's bodies, and receive an opinion from the European Parliament. "Therefore, it would have been premature for the Council to take a decision today", he explained. In his opinion, the Commission's proposal can be used as a basis for an agreement, and the Luxembourg Presidency "will afford this its highest priority" with a view to adopting it at the JHA Council of 8/9 October 2015.

The Minister, nonetheless, specified that, since the Treaty of Lisbon, the Council could take decisions with a qualified majority. "The conclusions of the Presidency are based on a very large majority, and the Council may take a decision at any time with that majority", he explained. He, nonetheless, believes that certain leaders need to be "given time". "Even a small country such as Luxembourg can take in a few hundred people of a different religion or whose skin is a different colour, and that should also be the case in larger countries", he stated, going on to say that "we need to overcome this fear, which is not the case everywhere, but the Presidency is going to help everyone move in the right direction".

The JHA Council also analysed all of the other new proposals from the Commission, declaring itself ready to take all necessary measures to start examining them without delay, and calling on the European Parliament to do the same. With regard to the proposal for a European list of safe third-countries of origin, the ministers undertook to "quickly reach an agreement in principle" in order to begin negotiations with the Parliament without delay.

The meeting also highlighted the importance of the return and readmission policy, emphasising the effective control of external borders and insisting on greater cooperation with the third-countries involved, indicated Jean Asselborn.

In this context, the Minister stated that the challenges facing Greece, which is on the frontline as a result of its geographic location, "are European challenges". Therefore, the Council decided to support Greece in its efforts to reinforce its asylum system, its reception capacity and the management of external borders. Furthermore, the Council decided to actively support the Western Balkans countries which are currently on the main transit route. Finally, in relation to Turkey, which is also an important reception and transit country, the Minister believes that it is important for the EU to see it as "a key partner in this challenge".

The Minister for Immigration revealed that the Council had decided to increase EU aid to the UN High Commissioner for Refugees (UNHCR) "to enable it to effectively and humanely manage its refugee camps", since the situation in the refugee camps "is critical and the UNHCR does not have the funds required to work properly". "In this context, I welcome the initiative from Norway to organise an international conference for donors supporting Syrian refugees", he said, noting that Member States and the Commission had reached an agreement to continue working on resettlement options.