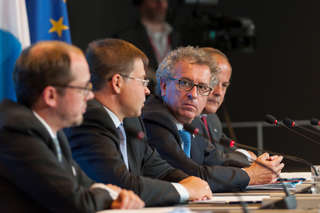 The European Ministers of economic and financial Affairs met in Luxembourg on 12 September 2015 for the second day of their informal ministerial meeting. This new session was dedicated to deepening the Economic and Monetary Union (EMU) as well as the issue of the " bridge financing " for the Single Resolution Fund (SRF) ".

During the press conference that followed the meeting, Pierre Gramegna, Minister of Finance and president-in-office of the Ecofin Council, concentrated on deepening the EMU in the context of the Report of the Five Presidents. If "everyone welcomed the report", the discussion focused on the first phase anticipated by the report and revolved around five major points, said the minister. To reiterate, this report urges taking measures in several areas and to implement them in stages.

The first phase, which will begin in July 2015, is aimed at making the EMU more resilient by relying on existing tools and maximising as much as possible the use of the treaties in force; this involves "deepening by doing".  During the second phase (known as the "completion of the EMU"), broader actions will be put into place so as to make the convergence process more binding by means of, for example, a set of benchmarks for convergence jointly identified which could ultimately become legal in nature as well as a Treasury of the euro zone. The objective is to attain the final phase - a deep and genuine EMU - by 2025.

The discussions of the ministers focused primarily on the "long-term aspects of the report". Thus, "it is necessary to be able to understand and to describe what is the final goal of the EMU between now and 2025, in other words, there has to be a vision", stated Pierre Gramegna. "This vision extends beyond monetary and economic aspects, it will translate into growth, employment and welfare ", he added. For Pierre Gramegna, "this is the only way we can explain to our fellow citizens that we are not dealing with an abstract financial and economic issue but which really lies at the very core framework which is conducive to growth". The minister also underlined the need to "clarify this in a better manner" to gain "more public support and more legitimacy", and thus "more democracy".

Secondly, the ministers focused on the "need to implement that which already exists". "Implementation is key to have a level playing field, to have the buy-in of all of the players and to draw up a simplified framework", stated Pierre Gramegna.

The third point addressed by the ministers related to "short-term progress", which require no treaty changes although some things may need legislative changes at the level of the directives or of their interpretation", stated the minister. "There is a large consensus on the fact that we can go more deeply in the euro zone. This means sharing more risks if we concurrently reduce the risks on the system", said Pierre Gramegna. "Sharing the risks by mutualising them is possible but everyone should assume their responsibilities and reduce system risk", he added, specifying that this could be done within the framework of the Banking Union, in the project for Capital Markets Union and using "instruments that we already have available and which need to be streamlined or simplified such as the two pack, the six pack and the macroeconomic imbalance procedure".

Valdis Dombrovskis, Vice-President of the European Commission responsible for the euro and social dialogue, also emphasized that the discussion had highlighted the need to ensure a good balance between responsibility and solidarity "will be the key to its success". In addition, in economic terms, this will involve focusing on productivity, said Pierre Gramegna. "This will allow increasing competitiveness of the countries in the euro zone and then our growth will improve", concluded the minister.

The discussion then focused on the manner of attaining more legitimacy and buy-in by the citizens. In this regard, Pierre Gramegna referred to a greater inclusion of the national Parliaments, of the social partners and an enhancement in the role of the European Parliament.

Lastly, there was an exchange of views between the Member States of the euro zone and the non-Members, the minister underlining the need to "improve the dialogue between the 28 and the 19 Member States of the euro zone". "This dialogue must be structured better and for this the discussions must be completely open and transparent ", said Pierre Gramegna. "We must ensure that there are options for the countries that want to participate in certain aspects and also that the integrity of the single market be preserved because this is a project that involves all 28 countries, it is a precious acquis of the EU”, he added. The minister also stressed that the discussion had not addressed the reinforcement operation of this dialogue, but its principles. It must be done in a manner that all subjects having an influence on the 28 are able to be raised, that assures the transparency of the discussions to define whether decisions have an influence or not and that ensures a form of "harm mitigation". "The word 'harm' was used and the discussion is open to determine whether there really is harm to the States that are not members of the euro zone", said Pierre Gramegna.

Valdis Dombrovskis, in turn stated that it will be necessary to ensure "openness and transparency" towards the latter. " We are committed to this and the fact that we have organised this discussion within the Ecofin Council rather than the Eurogroup is a good indication of this will", he added.

As regards the method, Pierre Gramegna emphasized that it is necessary to have a "good sequencing of the work". "We must have an efficient agenda that shows at what rhythm we are improving the solidarity and responsibility of each partner on the one hand so that on the other hand we can better share the risks", he said, adding that the Council has requested the Commission to prepare a time line. The Commissioner for his part stated that the Commission will propose a first package "highlighting the general proposals", towards mid-October2015.

As to the Single Resolution Fund (SRF), which is intended to finance the orderly resolution of a defaulting bank, the ministers discussed the bridge financing which is to permit the Fund to have sufficient proceeds during its launching phase, pointed out Valdis Dombrovskis.

It will be recalled that the SRF forms part of the "resolution" of the Banking Union and is to gradually be strengthened starting as of January 2016. It will be replenished by the national contributions of the Member States collected from the banking industry and it will be progressively mutualised, with a capital supposed to reach some 55 billion euros between now and 2023.

In this regard, the Commissioner emphasized that the SRF "needs to be credible in terms of the available funds "from the beginning. "If the financing is to be gradually assured by the industry, there needs to be an interim financing assured", he said.

More broadly on the subject of the Banking Union, the Commissioner emphasized the need to concentrate on the full implementation of the existing rules by the transposition into all of the Member States of the BRRD Directive (on banks resolution).

In addition, the ministers discussed the deposit guarantee scheme at the level of the EU. Although several Member States do not have national systems "that are fully functional" in this matter, the Commission is proposing a two-stage approach, the first aimed at developing a reinsurance system based on the national systems prior to, subsequently, proposing a European system.

Asked by the press about any reservations expressed by Germany regarding such a system at the EU level, Pierre Gramegna said that the Member States are ready to move towards such a system but that "it will need to be considered in sequence". "The question is to know when the risk sharing will take effect, let's not put the cart before the horse. When we see that we are making progress in the implementation [of the decisions], and progress as regards everyone's responsibility, that will be the time to talk about this system", he said.