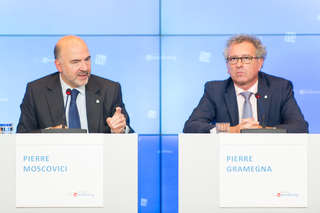 European Ministers of Economy and Financial Affairs met in Luxembourg on 11 September 2015 during the first day of the Informal Meeting of Ministers of Economy and Financial Affairs convened by the Luxembourg Presidency of the Council of the European Union (EU). On this occasion, the Ministers discussed the financing of the fight against climate change, just over two months before the Paris Climate Conference (COP21 ), the principle of minimum effective taxation and the financial impact of the refugee crisis currently facing the EU.

Financing the fight against climate change

At the press conference held after the meeting, the Minister of Finance and President of the ECOFIN Council, Pierre Gramegna, reiterated that the EU had committed to contribute to mobilising USD 100 billion a year by 2020, an "ambitious goal", as climate change will "lead to huge population movements". The Minister also mentioned the agreement reached with his counterparts on the significant role that private financing should play in this context and that it requires putting in place the right incentives. He also announced that the ECOFIN Council would adopt its conclusions on climate financing at its meeting of 10 November 2015.

Pierre Moscovici, European Commissioner for Economic and Financial Affairs, Taxation and Customs, added that "maximum transparency" for contributions, whether public or private, was necessary. The Commissioner also referred to a meeting of Ministers of Economy and Financial Affairs in the margins of International Monetary Fund meetings in Lima (Peru) in October 2015 "to discuss these issues". "We must reassure our partners that our commitment to achieve the goal of USD 100 billion per year still stands". "The relative successes or failures of the Paris Climate Conference depend on climate financing", concluded the Commissioner.

Ministers then discussed the minimum effective level of taxation in the EU and in third countries.Pierre Gramegna noted, in that regard, the "joint" assessment of all Member States that "cannot accept very low or non-existent tax rates for multinational companies". "There is an agreement on the fact that we must fight against aggressive taxation and that double non-taxation must be avoided", he stated.

According to the Minister of Finance, the minimum effective level of taxation is just "one of the ways in which to fight against tax evasion and avoidance", and this issue is particularly important in the context of the OECD's BEPS initiative (Action Plan on Base Erosion and Profit Shifting), the findings of which should be released within a month, he said.

According to Pierre Gramegna, Ministers also stressed the importance that they attached to the internal market in that regard and highlighted "the need to preserve the freedoms provided for in the Treaties". Ministers will continue their work on the revision of the Interest and Royalties Directive in respect of which they agreed to do everything possible to make rapid progress, noted the Minister of Finance, but they have not "been able to set a specific time-limit" due to the complexity of the issue, he added.

Ministers also expressed their agreement on the rapid conclusion of the draft Directive on mandatory automatic exchange of tax rulings between Member States, with the objective being to finalise it and adopt it at the next ECOFIN Council of 6 October 2015. This is "a key priority of the Presidency and the Commission", said the Minister, who added that it is a matter of "credibility of the EU and that it is also a sign that we want to be ahead in this matter and have a directive that is setting the standards for the rest of the world".

Pierre Gramegna also referred to the discussion on the list established by the European Commission on jurisdictions that do not meet the criteria in terms of fiscal transparency. In this regard, the Commission informed Ministers of its intention to publish a revised list in the coming days or coming weeks "which will take account of the comments received since its publication in July 2015".

For his part, Pierre Moscovici welcomed the "very important discussion on how to ensure that multinational enterprises generating profits in the EU pay their fair share of tax in the EU", with the Commissioner finding that it is "unacceptable that some pay nothing or nearly nothing on their vast profits made in Europe". "We must ensure that these profits are taxed at the appropriate level in the place where the activity is carried out", continued Pierre Moscovici. He said he that it was not for the Commission to harmonise minimum taxation rates but to agree on the principle that "everyone should pay their fair share", as the first victims of tax evasion are the other companies, including SMEs, and citizens.

Pierre Moscovici also stated that the draft Directive on the mandatory automatic exchange of tax rulings must be adopted "now" and that it should be implemented quickly in accordance with OECD operations, with the Commissioner calling for implementation from as early as 2016. He reiterated that the system should be ambitious and that the Commission should be "one of the main players" (the proposal provides for the Commission to be at the heart of the exchange), so that it could ensure a level playing field (setting up equivalent rules for everyone). "We need a regulatory mechanism to ensure that exchanges are taking place and this must be the Commission", he said.

Regarding the refugee crisis across the EU, Pierre Gramegna stated that there would be no short-term resolution because "there are several issues to be considered", such as "social problems, in terms of work, education, defence and security". "All these aspects will have an impact on the EU budget, on the one hand, but also on national budgets, on the other", added the Minister, announcing that EU Ministers of Economy and Financial Affairs had asked the Commission to make an economic and financial assessment on the impact of the refugee crisis, while the Presidency and several Member States had suggested neutralizing expenses relating to refugees in light of EU rules on budget deficits in this context. In this respect, the Presidency also invited the Commission to analyse to what extent the refugee crisis could be considered to be an "exceptional circumstance" under the Stability and Growth Pact, he added. Finally, two international institutions have expressed their willingness to contribute to financing the action to be taken: the European Investment Bank with which Ministers held discussions during a working lunch before the Informal Meeting on 11 September; and the Council of Europe Development Bank, said Pierre Gramegna.

Commissioner Pierre Moscovici also recalled that the Commission would apply the rules of the Stability and Growth Pact "consistently" to all Member States. "This has been done and will always be done in the light of the specific, indeed exceptional, circumstances", he added, stressing that the Commission would carry it its assessment "in a timely manner". For his part, Pierre Gramegna observed that this situation which is "exceptional given the number of refugees and the amount of financial resources at stake", could be considered to be an "exceptional circumstance", as provided for by the Treaty.