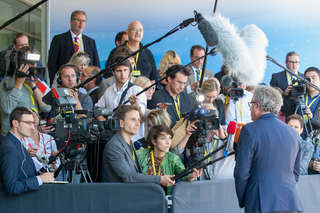 The refugee crisis in Europe has been at the heart of declarations from EU Finance Ministers on their arrival at the Informal Meeting of the Ministers for the Economy and Finance held on September 11 and 12 in Luxembourg. Although the subject was not on the agenda for the meeting, the financing of measures to be taken to cope with the influx of refugees into Europe was the subject of discussions during a working lunch with the heads of the European Investment Bank (EIB).

According to Pierre Gramegna, the Luxembourg Minister for Finance and President of ECOFIN (Economic and Financial Affairs Council), it constituted an "exceptional situation, the magnitude of which has never been experienced since the end of the Second World War". The Minister, who mentioned the "significant needs" in financial terms of Member States accommodating the migrants, indicated that the EIB was prepared to "make means available for the purpose of cooperating with states, regions and cities", just as it does in the event of natural disasters.

Werner Hoyer, the President of the EIB, mentioned the need for a "large-scale European initiative" because "huge sums" are needed to cope with the taking in and integration of the refugees. According to him, it is "logical" that the institution should act "swiftly" in case of a "humanitarian challenge", in the same way it has done in cases of "natural disasters". Specifically, Member States, local authorities and the EU will benefit from "loans at preferential rates" which will be raised in proportion to their financial participation.

The Finnish Finance Minister, Alexander Stubb, referred to a "historic moment, a question of solidarity and humanity", if not "a defining moment of European integration" and the need to find a "common solution". He also announced that Finland had decided to take part in the quota system, stressing the fact that it was doing so on a "voluntary basis". In accordance with the Commission's proposals, Finland will therefore host between 20,000 and 30,000 refugees in 2015, of which 2,400 will be part of the relocation mechanism, the Minister announced. In order to finance the accommodation of migrants, Alexander Stubb also suggested a future "Solidarity Act", stressing the "kindness and empathy" shown by the Finns towards the migrants and their "understanding" regarding their needs.

Magdalena Andersson, the Swedish Finance Minister, pointed out that her country had clocked up the largest number of requests for asylum per head in Europe. "Of course, in the short term, that will put pressure on our public finances, but I am convinced that when these persons begin to work in Sweden, they will also contribute to our public finances and the growth of the country", she said. She also highlighted the "demographic challenge" which Sweden is facing, in common with so many other European countries. "That represents a great potential for our economy, but also for the rest of Europe" she added. The Minister was convinced that the quota system should be "mandatory", and also stressed the need for greater solidarity between the Member States regarding the better distribution of asylum seekers in the EU.

"It is in our common interest to make the best of this situation", said the Lithuanian Finance Minister, Rimantas Šadžius, who announced that the Lithuanian government had accepted the Commission's proposal to accommodate over 1,000 refugees.  "This will be beneficial for Lithuanian society and for the country's economic skills", he said, pointing out that Lithuania had reviewed its prospects for growth for 2015 downwards to 1.9%.

Lastly, the European Commissioner for Economic and Financial Affairs, Pierre Moscovici, spoke of an "existential problem for the European Union". "It involves defending our values, and it therefore requires a European response, one that is generous, humane and effective", he said, pointing out the "needs of the European economy", particularly in demographic terms. The Commissioner emphasised that "The economic impact of these migrations is not a negative one"."The 160,000 refugees that the Commission is offering to accommodate corresponds to 0.07% of the European population. Let us live up to our responsibility, our history and our values", he concluded.