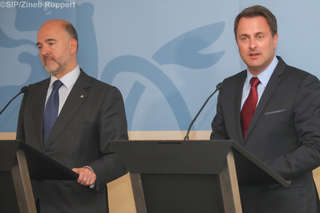 This exchange of views provided an opportunity to take stock of the measures taken by the Luxembourg Presidency and the European Commission, in particular with regard to taxation, and to discuss the EU refugee crisis. It took place "in a cordial atmosphere" and proved to be very "interesting", explained Xavier Bettel at the joint press conference.

"It makes me very happy to say that the Commissioner is pleased with our efforts", he declared, stressing that in the context of the Presidency, Luxembourg has "no intention of blocking measures" but wants to "contribute" to making progress.

With regard to the proposal on the automatic exchange of information on tax rulings between Member States, Xavier Bettel reiterated that a level playing field is a "very important" requirement as the current system provides for the exchange of information on request and "certain Member States do not cooperate constructively or actively". Although the draft directive will establish a mandatory legal framework to facilitate information exchanges, States should also be prepared to cooperate on request "as it has been requested by the Commission and the European Parliament", he said.

Pierre Moscovici remarked that the Commission and the Presidency had a shared agenda on taxation, for which he praised "the commitment to making progress", and also for including it on the agenda of the Informal ECOFIN Council Meeting. Regarding the draft directive on the automatic exchange of information on tax rulings which is to be addressed, the Commissioner welcomed the convergence of views with the Presidency on "the rapid and high-level action taken to finalise the proposal" and called for an agreement to be reached at the ECOFIN Council of 6 October.

"We need a real automatic information exchange mechanism", continued Pierre Moscovici, who emphasised that the need to ensure a "level playing field" was "absolute". "The automatic exchange of information will ensure that the same rules apply to everyone and guarantee transparency", he declared. He outlined that the exchange would involve taxation authorities: "we also need to guarantee fiscal and business secrecy - we do not want to interfere with economic activity".

The meeting also addressed "the migratory [and] humanitarian crisis" which the EU is facing, observed Xavier Bettel, who stated that he had instructed his Finance Minister to call for the neutralisation of public expenditure in light of EU budget deficit rules in this context. Noting that the crisis had been unexpected, Xavier Bettel stressed that certain countries should not risk becoming unable to finance such expenditure or make cuts in other areas. "This is a human crisis [...] involving people who are not seeking a better quality of life, but rather just to survive [and] live", he said, noting that "solidarity is one of the founding principles of the EU" and that it "is not a one way street".

The Prime Minister stressed that he hoped the Minsters for Justice and Home Affairs will "agree on necessary common and reasonable positions demonstrating that Europe is strong" during their extraordinary meeting on 14 September which will focus, in particular, on the Commission's proposal on the distribution of 160,000 refugees in the 28 Member States. The Prime Minister also pointed out that a quarter of Lebanon's population are refugees. "Looking in the mirror we must ask ourselves what kind of Europe are we today and what kind of Europe we want for tomorrow"

Pierre Moscovici took the same view, stating that "Europe has a duty to deal with this humanitarian crisis in a humane way". He also took note of the proposal on netralisation of the budget. "It is up to the Commission to put forward proposals, since it is the Commission's role to enforce budgetary coordination and supervision rules. I believe that we should examine this proposal when it is put before us as a set of rules", he said.