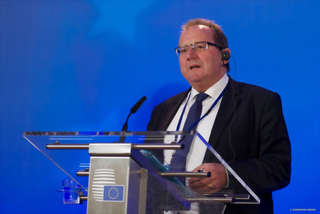 European Ministers for Agriculture 'welcomed' the European Commission's package of measures in response to the slump in prices and income in the dairy and livestock sectors in certain Member States, at the extraordinary Agriculture Council held in Brussels on 7 September 2015. This meeting was convened by the Luxembourg Presidency in order to set out possible additional measures to address the worrying market situation in the short term.

By way of reminder, as the Presidency set out in its preparatory note for the Council, the market situation remains challenging for a number of products. In addition to the extended Russian embargo, slowing growth in China and the prolonged drought in summer 2015, a slump in prices 'reflecting a supply-demand gap in certain sectors' has hit hard on the European farmers putting severe pressure on farm incomes. Several thousand farmers arranged to meet in Brussels that same day to express their anger and to call for European leaders to find a way out of the agricultural crisis.

'The Union reiterates its clear support for the agricultural sector, a sector which contributes and will continue to contribute to boosting employment and strengthening social cohesion and sustainable development', declared Luxembourg's Minister for Agriculture and President of the Council, Fernand Etgen, during the press conference held after the meeting. He welcomed the European Commission's package of measures which will allow for EUR 500 million to be used for the benefit of farmers 'immediately'. The package should address the cashflow problems farmers are facing, stabilise agricultural markets and address the functioning of the supply chain according to a press release issued by the Commission. The funds available are neither collected by way of the reserve for crisis situations, nor the 2014/15 milk super levy, but from the margins available under the Commission's budget.

The Minister for Agriculture noted, in particular, that the Commission proposed that the most significant part of the package will be provided to all Member States in the form of targeted aid to support the dairy sector. The national envelopes will be finalised by the Commission to ensure that they are 'fairly distributed, targeted and effective', having particular regard to those Member States and those farmers which have been most affected by the market developments, stressed the European Commission Vice-President for Jobs, Growth, Investment and Competitiveness, Jyrki Katainen, who stood in for the European Commissioner for Agriculture and Rural Development, Phil Hogan, absent due to illness.

Another reason for the Council to welcome this package is that the Commission suggested allowing Member States to advance direct payments up to 70% from mid-October (currently 50%), in accordance with the courses of action referred to by the Luxembourg Presidency in its preparatory note. The Commission also proposed to increase the facility for Member States to advance certain Rural Development payments (from 75% to 85%).

Fernand Etgen further stressed that the Commission is 'working' on an enhanced scheme for the  intervention and private storage aid for butter and skimmed milk powder for small- and medium-sized producers, providing, in particular, for 'higher levels of aid'. Intervention and private storage aid periods for butter and skimmed milk powder will not be prolonged beyond 29 February 2016, in the same way that an increase in the price for public intervention shall not be addressed, contrary to what several Member States have requested. According to Fernand Etgen, 'the Council has observed some interest in a temporary increase in the price for public intervention for skimmed milk powder', noting that there will be further discussions on that request which was not supported unanimously by the delegations. He also stressed that the Commission planned to revive the private storage scheme for pigmeat following its suspension in early 2015.

In terms of promotion, the Commission announced its intention to increase the promotion budget for 2016 in addition to the EUR 81 million already committed, but without specifying by how much. Part of this budget will be dedicated to the dairy and pigmeat sectors, added the Commission. Fernand Etgen underlined in that regard that the Council had welcomed the decision 'to strengthen the promotion policy in respect of the EU and third countries, in addition to work on tackling non-tariff barriers'.

The President of the Council also welcomed 'the implementation of new financing opportunities opened up by the European Fund for Strategic Investments' under Juncker's Investment Plan in the Commission's package of measures, as well as the decision to strengthen the role of the European Milk Market Observatory and the development of a similar observatory tool for pigmeat. He also welcomed the measure to establish a High Level Group 'to improve the functioning of the food supply chain for the benefit of producers'. Lastly, he noted that the Commission intended to promote full use of the milk package - with the report on the milk package foreseen for 2016 - in particular by organising exchange of best practices.

Moreover, other measures have also been put forward by the Member States, highlighted Fernand Etgen. In addition to temporarily increasing the intervention price for skimmed milk powder, the delegations stressed the importance of finalising negotiations with Russia on sanitary restrictions for pigmeat not covered by the ban. They also want more flexibility in the implementation of the new Common Agricultural Policy (CAP) during this year of transition, the relaxation of state aid rules or even the creation of a High Level Group to focus on the future of the dairy and livestock sectors. The implementation of the simplification programme giving priority to measures to reduce production costs, enhanced cooperation within producer organisations and deeper reflection on instruments to stabilise price volatility are among measures put forward by the delegations, observed the Minister.

Lastly, the Council noted the requests of the Polish and Romanian delegations with regard to drought, as well as the support shown in this regard by several delegations. 'The Presidency shall address implementation next week”, during the Informal Meeting of Ministers for Agriculture and Fisheries on 14 and 15 September 2015, concluded Fernand Etgen.