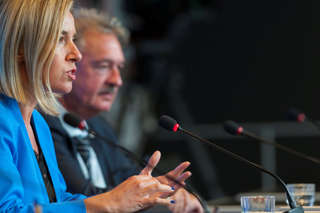 An Informal Meeting of Ministers of Foreign Affairs of the EU (Gymnich) was held in Luxembourg on 4 and 5 September 2015 and focused on the migratory crisis.

"We need a mechanism to share responsibilities on the basis of established criteria", declared Luxembourg's Minister of Foreign and European Affairs, Jean Asselborn, during a press conference held after the meeting. Jean Asselborn co-chaired this Informal Meeting alongside the High Representative of the European Union for Foreign Affairs and Security Policy, Federica Mogherini.

Jean Asselborn who is also the Minister of Immigration and Asylum referred, in particular, to the size of a country and its economic strength as distribution criteria. According to Jean Asselborn, there will be a discussion on the sustainability of mechanisms for the resettlement and relocation of refugees and asylum seekers in clear need of international protection with regard to which the Ministers of Immigration struggled to reach an agreement at the extraordinary Justice and Home Affairs (JHA) Council of 20 July 2015. "I think that we are moving in the direction of a permanent mechanism", he stated.

To "avoid the significant differences" between Member States in terms of recognition rates for asylum seekers and duration of the procedure, Jean Asselborn again put forward his proposal to set up a "European jurisdiction". In addition, the Minister called for Member States to comply with their international obligations. "If a person who is being persecuted and falls within the scope of the Geneva Convention knocks at our door, it is our duty to open it to him", he insisted. He believes that "everyone is in agreement that this is a European problem which requires a European solution".

The Minister also stated that the United Nations Refugee Agency (UNHCR) has informed him that "out of 300,000 migrants arriving in Europe, 46% are Syrian, 12% are Afghans and just under 12% are Eritreans". In addition to these nationalities, Federica Mogherini again mentioned Iraqis who are among the biggest groups of migrants and observed that "refugee movements also include Palestinians". In a press release, the UNHCR observed that 300,000 people have crossed the Mediterranean since the beginning of the year, in comparison to 219,000 in 2014. Out of 300,000 people, 200,000 arrived in Greece and 110,000 in Italy. The fact that so many people arrived in Greece represents a "significant change", stated Jean Asselborn who added that "we are ready to help countries in difficulty", in particular with regard to registering migrants and refugees which is a problem for Greece. 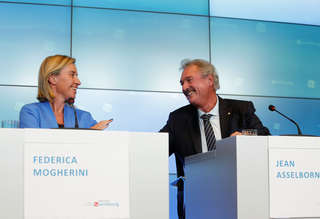 The High Representative of the European Union for Foreign Affairs and Security Policy, Federica Mogherini, spoke of a "difficult meeting" on the "refugee crisis". "It is time to start using the right words: although there is a partial flow of migrants, it is above all a flow of refugees. That changes the outlook of our moral and legal obligations", she stated.

According to the High Representative, it is "becoming clearer with each passing day that it does not affect one Member State alone", but rather all EU countries. Even though only a few months ago the problem was concentrated in certain Member States (Greece, Italy and Spain), it is now affecting other Member States (Hungary, Austria and Germany) and it "could affect others in the forthcoming months", she insisted. "I hope that eventually we will realise that all these people are coming to Europe, not one Member State in particular", added Federica Mogherini.

In addition, the High Representative welcomed the "very important" discussion with EU candidate countries present for the last session of the meeting, in so far as they are located on the so-called Balkan route. "EU candidate countries are in the same boat facing this crisis", she continued, stressing the "regional and global" nature of a crisis which "does not only concern the EU, but Europe as a continent". "We are facing tragic events", insisted Federica Mogherini, in respect of which we therefore need to strengthen cooperation with these countries. "This crisis is not an emergency event because it is here to stay, it is an urgency. It won't finish, it is here to stay. The sooner we accept it, the sooner we will be able to respond and manage it efficiently",said Mogherini.

The High Representative observed, who believes that "the time for blame games is over" and that "the time has come for decisions to be taken and actions to be made with unity as Europeans". "In the past, the EU has sometimes evolved through crises and I believe that this is one of those moments. This is not solely a refugee crisis, but the future and the very meaning of our Union is at stake", insisted Federica Mogherini.  She added that "the external aspects of our policies allow us to find solutions and to take action, but it is the internal aspects that strengthen or weaken the credibility of our external actions".

However, although a "consensus" on external aspects has been reached within the EU, this is not the case with regard to internal aspects in respect of which several Member States, in particular in the East of the EU, have categorically refused any mechanism for the compulsory distribution of asylum seekers and refugees between Member States. "Everyone now realises that a mechanism for sharing responsibilities is needed, but there is a great disparity on the exact nature of this mechanism", continued the High Representative, before highlighting the difficulty of a voluntary mechanism when it comes to dealing with numbers. A "highly complex" system "takes time" but "we don't have that luxury". "We need a common and rapid system", she insisted.

During the meeting, the Member States and EU candidate countries therefore agreed to strengthen their cooperation on five different levels. It is a question of protecting asylum seekers, managing borders "in compliance with human rights", fighting against smugglers and traffickers, working together with countries of origin and transit and tackling the root causes of the problem, that is to say the "escalating number of conflicts" and, in particular, the Libyan crisis and the conflict in Syria.

Federica Mogherini then returned to the topic of the Middle East, also a focus of the Informal Meeting of Ministers of Foreign Affairs. With regard to the migratory crisis, she also touched on the fact that flows of migrants and asylum seekers to Europe include more and more Palestinians. The High Representative spoke about a "long and constructive" discussion in preparation for the next steps and, in particular, working with their partners in the Middle East Quartet (EU, USA, Russia and the UN) in the Israeli-Palestinian peace process. "Restarting the process after more than a year of stalemate is also a way in which to enhance mutual understanding and improved cooperation with the Arab world and the Middle East", she observed.