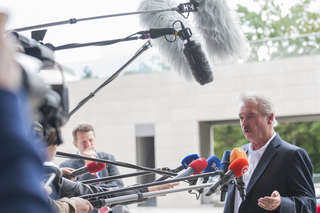 On his arrival at the Informal Meting of Ministers of Foreign Affairs of the EU held on 4 and 5 September in Luxembourg, part of which will focus on migration, Luxembourg's Minister for Foreign and European Affairs, Jean Asselborn, solicited a European solution to migratory pressure and called for solidarity.

"This issue goes beyond the financial crisis in Greece and will keep us busy into the next decade", stated the Minister who is co-chairing the Informal Meeting alongside the High Representative of the European Union for Foreign Affairs and Security Policy, Federica Mogherini. "There can be no national solutions, only a solution at European level", he maintained. "Europe is synonymous with values, international law and humanity. Europe is at risk of losing face and its essence and will be blameworthy if these values are called into question", he insisted, adding that "the image of Europe worldwide is at stake".

Jean Asselborn welcomed the announcement by the United Kingdom to receive thousands of additional Syrian refugees and called for the EU to support Greece which is experiencing "serious problems". Refugees and migrants arriving in Greece must be registered, given clothes and undergo a health check, he said. "We must put an end to this migration pattern from the South to the North", he stated and called for a system of quotas or a plan for a "humane" distribution of migrants" to be set up. "It is possible and it is our duty", he added, noting that he is waiting for concrete results for the October Justice and Home Affairs (JHA) Council, following the extraordinary JHA Council convened by the Luxembourg Presidency for 14 September 2015. "There is no country in Europe that can claim not to have a culture or tradition of receiving refugees", he went on to say. 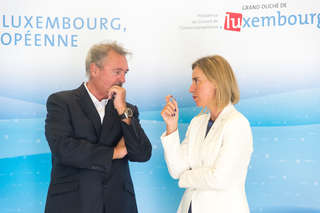 Asked about the proposal for a European System of Border Guards which he put forward during a speech to the EU Ambassadors' Conference held on 3 September 2015 in Brussels, Jean Asselborn said that it would be feasible "in times of crisis" for Member States "unable to implement it themselves". Highlighting the "significant differences" in terms of recognition rates and the treatment period for processing an application for asylum, the Minister also called for specialised European jurisdiction to lay down common rules and standards in all Member States for asylum cases, a task that should be entrusted to the European Asylum Support Office (EASO).

Migration and the refugee crisis will be at the heart of discussions, explained Federica Mogherini, on her arrival in Luxembourg. We will focus on cooperating with countries of origin and transit, she noted. "We will therefore continue the work of Ministers for Defence and Ministers for Home Affairs", she added, stressing the need for a coherent approach across EU internal policies.

Frank-Walter Steinmeier: "a common European asylum policy with common standards and procedures in Europe is needed"

For the German Minister for Foreign Affairs, Frank-Walter Steinmeier, a "common European asylum policy with common standards and procedures in Europe" is needed. "We will not solve the problem by pointing fingers at our neighbours", he stated. "We must find another way of working together", he said, adding that "there must be no division in Europe in the face of this challenge".

The Minister also put forward a proposal submitted together with his French and Italian counterparts, Laurent Fabius and Paolo Gentiloni, to other EU Member States, and which sets out their vision of the European Asylum Policy and the concept of European solidarity. The three Ministers believe that a more equitable distribution of refugees within the EU is needed because "it is inconceivable that only four or five countries assume the responsibility of receiving all those arriving into Europe", stated Frank-Walter Steinmeier.

But it is also necessary for Europe to agree on a list of safe third countries, added the German Minister, so as to "offer people in countries of origin, particularly countries in Africa, reasons to stay there". He believes that this requires the EU and Member States to implement a "much more attractive" policy in these countries "which strengthens employment for young people and improves growth prospects". It is also necessary to strengthen the EUNAVFOR naval operation and step up the fight against the criminal activities of smugglers and traffickers, concluded Frank-Walter Steinmeier.

The Hungarian Minister, Péter Szijjártó stated that Hungary is facing a "tragic situation" and has registered the arrival of some 163,000 migrants of which 99.3% arrived across the border with Serbia. "Hungary is dedicated and committed to complying with all European regulations, whether the Schengen Agreement or the Dublin Regulation", he said, highlighting the fact that, under the Schengen Agreement, it is up to the Member States located at the external borders of the EU to manage and "defend those borders" and to ensure that there are official border crossing points. "That is why we erected a fence", he continued, referring to the barbed wire fence erected by Hungary along the 175 km of shared border with Serbia.

The Minister also stated that Hungary had established transit areas in which migrants may submit their application for asylum and await the outcome which, takes "several days" to process. In addition, he confirmed that Hungary would ensure the provision of essential supplies to migrants in these camps, but not in the main train station in Budapest which is not intended to receive them.

He believes that the current situation in Budapest, where several thousands of migrants have tried to board trains to the rest of the EU, is caused by "migrants refusing to cooperate with Hungarian authorities", in particular with regard to their registration pursuant to the Dublin Regulation (which provides that the first country of entry of asylum seekers, where they should be registered, must be the country that processes their asylum application). He affirmed that Hungary had registered all migrants entering the country but that "misinterpreted messages" had "provoked aggression among some migrants". As a result, and in order to comply with its obligations, Hungary has suspended traffic to Western Europe.

The Minister also said that Hungary had received and was prepared to receive refugees "but not economic migrants", calling for a "clear distinction" to be made. "Europe must stop creating unrealistic expectations among people who want to come to Europe simply for economic reasons".

Paolo Gentiloni: "we need to make progress towards the ambitious objective of creating a common law on asylum"

"It is not simply a question of quotas but we need to make progress towards the ambitious objective of creating a common law on asylum", declared Paolo Gentiloni, Italian Minister for Foreign Affairs and International Cooperation. The principle that asylum seekers need to submit their application for asylum in the country in which they entered the EU no longer works, he stated. People fleeing war or murderous dictatorships are seeking refuge in the EU, not in the first country which luck brought them to, maintained the Minister. He fears that leaving countries to manage their problems alone, or even to work against other countries, threatens the Schengen Area and the freedom of movement.