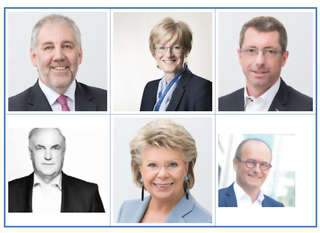 The 1 July 2015, the rotating six-month presidency of the Council of the EU will be in the hands of Luxembourg, one of the smallest, yet most experienced member states. Luxembourg will have to deal with many pressing issues, including the Greek debt crisis, an increase in irregular migration and the preparation for the climate change conference in Paris in December. The European Parliament’s press office asked all of the country's six MEPs what they see as the main challenges.

Georges Bach (EPP): "Growth and jobs are priorities for the social sphere"

As a member of the transport committee, it is important to me that the fourth railway package is finalised with a satisfactory result for companies, customers but also railway employees. Growth and jobs are priorities for the social sphere. I expect to see concrete measures for youth employment, but also proposals on fighting long-term unemployment and on increasing the participation of female employees.

Frank Engel (EPP): "Rarely have the challenges been so great"

Rarely, if ever, have the challenges facing a Luxembourg presidency been so many and so great: a migration crisis; a Greek crisis; a United Kingdom that threatens to leave the Europe as we know it. If it was not enough, the European economy lacks investment, dynamism and growth. Fixing all this in six months will be impossible. Managing it as best as we can would be in the tradition of Luxembourg presidencies. We have to succeed. As so often, there is no alternative.

Only by putting in place consistent policies followed by all member states can we tackle the challenges we face. Luxembourg has to give a new impetus to this. Economic growth and stability could be created by setting up a genuine common digital market, deepening the economic, monetary and financial union as well as concluding balanced trade agreements. Luxembourg will also be able to show leadership in balancing relations between Europe and its neighbours and responding firmly to foreign threats.

Migration will certainly be one of the main challenges that the Luxembourg presidency will have to address. We have opened our internal borders, now we should go further and create a common asylum and migration policy. Other great challenges include the digital market, energy, promoting European innovation and creativity and we shouldn’t forget the thorny issues of TTIP and LuxLeaks. Europe needs a new dynamic based on more solidarity. After having constructed an economic union, albeit an imperfect one, let’s now work together on creating a union at the service of its people.

Charles Goerens (ALDE): "The climate change conference in Paris will be the main challenge for the Luxembourg presidency"

We have known for some time now that the climate change conference in Paris will be the main challenge for the Luxembourg presidency. When it comes to the economy, we will need progress on fiscal issues and the implementation of the European Fund for Strategic Investments. The success of the Luxembourg presidency will also be judged on its capacity to make the EU more cohesive and coherent.

Claude Turmes (Greens/EFA): The presidency will have to get all member states "to agree on an ambitious common position" at the Paris conference

We are called upon to keep global warming within 2°C by the end of the century. Luxembourg’s presidency will have to get the 28 member states to agree on an ambitious common position and lead the EU delegation at the Paris conference in order to reach an agreement with our partners around the globe. Another challenge will be the energy union. Luxembourg is well placed to help create strong regional cooperation, as we have already done with our Belgian and Dutch neighbours within the Benelux.

This article has been published on the European Parliament’s website.