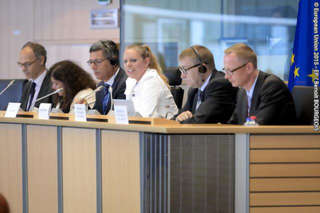 On 15 July 2015, Luxembourg's Minister for the Environment, Carole Dieschbourg presented the priorities of the Luxembourg Presidency to the European Parliament Environment, Public Health and Food Safety Committee (ENVI).

At the beginning of her speech, the Minister noted that she was 'very disappointed' with the European Commission work programme for 2015, in light of its decision to withdraw the circular economy legislative package from the agenda 'on the pretext that an agreement was not feasible', whereas work had only just begun. Regarding this issue, the Commission decided to withdraw the legislative package and present a new and 'more ambitious' proposal, a decision which drew strong criticism from the Council.

Carole Dieschbourg was of the view that the circular economy is 'a huge opportunity for a more competitive economy and job creation'. The Minister committed herself to ensuring that the new proposal will be more ambitious in environmental terms. She praised the commitment shown by MEPs to the issue, referring to a resolution adopted by the European Parliament on 9 July 2015. "Based on the Resolution, it is my understanding that the Presidency and the Parliament are going after the same objectives", stated the Minister. During the debate, a number of MEPs expressed their support for the Minister, as well as their intention to put pressure on the European Commission.

Another major priority raised by the Minister was the Paris Climate Change Conference to be held in December. Carole Dieschbourg emphasised that the objective of the 21st Conference of the Parties to the United Nations Framework Convention (COP21) is to reach 'an ambitious, legally binding, sustainable and dynamic' agreement, with a view to capping the increase in temperature to under 2 degrees. "Adopting a Framework Convention that all Parties can accept is the only way of ensuring the success of the agreement" and would "send a strong message to all the key players", she maintained. The Minister informed the Parliament that the Environment Council of 18 September 2015 will adopt conclusions in preparation for the conference.

The Minister expressed the view that the agreement must be 'guided by a long-term vision for a transition to a low emissions society'. A step-by-step approach must be taken to achieving this, with a 60% reduction in emissions by 2050 in comparison with 2010, and net emissions close to zero by the end of the century at the latest. In response to MEPs, Carole Dieschbourg noted that the emissions reduction target set at 40% between now and 2030, agreed in October 2014 by the Council in the run-up to the Paris Conference, is 'an understandable and clear goal'; however, a more ambitious approach is needed.

To this end, she stressed the importance of climate financing, another priority for the Presidency and 'key to reaching the right kind of agreement'. The Presidency also wishes to promote the idea of a toolbox with a wide range of financial instruments, both public and private, as a way of demonstrating that the 'Green Climate Fund is not the only financial instrument available'. Carole Dieschbourg takes the view that a 'wide range of instruments' is needed which would provide 'huge opportunities'.

The Minister also referred to the Post-2015 sustainable development agenda to be discussed by Heads of State during a special United Nations Summit in New York in September. Carole Dieschbourg argued that the development agenda "must stand shoulder-to-shoulder and be coherent with the climate objectives", noting that "environmental sustainability is crucial to reaching our goals in terms of eradicating poverty, given that it is often the most vulnerable who are the hardest hit by the effects of pollution and environmental damage".

Air quality improvement was another major issue, and featured in a number of questions from MEPs.

Carole Dieschbourg gave a commitment to ending the current hiatus, making reference to the most important texts: the Directive on national emission ceilings (NEC) which plays 'a fundamental role in combatting air pollution and reducing related premature deaths'. The Minister was 'confident of making progress on both the type of reductions proposed and implementation difficulties' and of reaching a compromise with the European Parliament. The proposed Regulation on the reduction of pollutant emissions from road vehicles (EURO5/6) was also touched on.

The Minister welcomed the proposal to reform the Emission Allowance Trading Scheme (ETS), which 'demonstrates that the EU is acting to maintain its pioneering role in combatting climate change'. In response to MEPs, the Minister noted that all sectors, including aviation, maritime and industry, should contribute to the solution.

Another priority for the Presidency is the 'greening' of the European Semester to be discussed at the Environment Council of 26 October 2015, the Minister stated, noting that the issue of harmful subsidies will be among those discussed.

Biodiversity was a particularly important issue for MEPs. The Minister assured them of the importance of this issue for the Presidency and informed them that she will speak in favour of adopting conclusions based on the mid-term review of the EU Biodiversity Strategy, as well as the 'State of Nature in the EU' report by the European Environment Agency at the Environment Council of 16 December 2015. Carole Dieschbourg stated that the conclusions should lead to the fulfilment of the six targets set out in the Strategy by 2020.

A number of MEPs put questions to the Minister on her position regarding the 'Habitats' and 'Wild Birds' Directives currently under review by the European Commission as part of the 'Better Regulation' agenda. Carole Dieschbourg noted that these Directives are the cornerstone of nature and biodiversity conservation policy, while stressing the importance of 'proper implementation'.

In this respect, the Minister cautioned against deregulation: "Our achievements in terms of environmental legislation are under threat from deregulation and a return to national regulation", she stated. She argued that "we must work together to show that environmental policy improves the quality of life of our citizens and drives economic competitiveness and innovation".