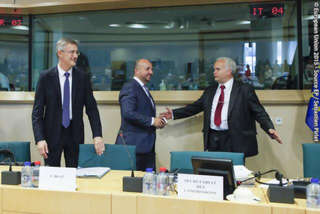 On 14 July 2015, the Minister of Justice, Félix Braz, and the Minister of the Economy, Etienne Schneider, presented the priorities of the Luxembourg Presidency to the Committee on Legal Affairs (JURI) of the European Parliament.

Félix Braz stressed in particular the importance of the reform of the Court of Justice of the European Union (CJEU), because of the "unacceptable number of pending cases" and the delay over certain proceedings. "It remains essential to conclude this reform; we are facing a real problem", he insisted. During the debate, the Minister responded on the subject to Liberal MEP Antonio Marinho e Pinto, rapporteur of the JURI Committee on this dossier, who requested an impact assessment on the need for this reform, pointing to the costs of increasing the number of European judges in times of fiscal austerity.

As a reminder, in April 2015 the CJEU proposed increasing the number of judges by 28 in three stages, including seven judges who are part of the Civil Service Tribunal which will be integrated into the CJEU in 2016. This means an actual increase of 21. In June 2015, this reform received the support of the Council of the EU.

Félix Braz responded to the MEP that between 2011, when the CJEU had already proposed to increase the number of judges by 12, and 2015, the number of cases had increased by 43% and the duration of proceedings could be up to 45 months at present. He emphasised the costs involved for non-reform, explaining that claims amounting to 26 million euros are made to the EU in respect of damages for excessive lengths of proceedings. He warned against increased actions and underlined the importance of the "direct" impact on companies waiting for a court decision. "The Council is convinced that this reform is urgently needed", concluded the Minister, adding that in some areas, the General Court has "a structural difficulty" in as far as acting within a "reasonable time" is concerned.

According to the Minister, the reform proposal will cost 20% more than that of 2011, while the number of cases has increased by 43%. For Félix Braz, this is a "proportionate" reform that is "consistent" with the change in the number of European rulings. He also explained that the duration of translations is a "negligible" factor, as the translation of a judgement takes on average 1.8 months (compared to a length of proceedings of between 32 and 45 months). He also indicated that "no more time must be wasted with impact assessments", which have already taken place, and that we have all the relevant data" to adopt a "balanced proposal".

During his intervention, the Minister announced his willingness to reach a first-reading agreement on the shareholders' right. Félix Braz referred to the amendments adopted by the European Parliament during a vote which took place on 8 July 2015; amendments that were numerous and "substantive in nature", the sort that it is "required to consult the Member States" before starting negotiations with the European Parliament, the Minister explained. He stressed the importance of strengthening the commitment of the shareholders towards the companies in which they invest and improving the transparency and the right of inspection of shareholders concerning the remuneration of directors and transactions between related parties.

Félix Braz is committed to working "flat-out" for an agreement on the Regulation aiming to simplify the acceptance of certain public documents. "The reduction in administrative formalities and associated costs when citizens exercise their right to reside freely in the EU is a necessity", explained the Minister. The Council, which arrived at a general approach on the dossier, chose to focus this simplification on the main civil status documents, he indicated, stating that the authorities will no longer require an apostille to be affixed.

Etienne Schneider presented the priorities for the area of intellectual property, which falls within his remit. He spoke particularly about the proposal of a directive on trade secrets, on which the European Parliament has just adopted its position. Trilogue negotiations with the European Parliament may be launched from September, Etienne Schneider explained."The Presidencywill endeavour to finalise the work and find a balanced compromise", notably on issues related to the impact on mobility and employment, the guarantee of freedom of movement, and even the exceptions concerning whistle-blowers. In this context, several members called for strong protection of the latter. Etienne Schneider assured them that exceptions for whistle-blowers and journalists have been provided for in the directive.

Another topic raised by Etienne Schneider was the Marrakesh Treaty which aims to facilitate access to published works for persons who are blind, visually impaired or otherwise print disabled. The Minister stressed the will of the Presidency to reach a compromise on this dossier, stating disagreements and a blocking minority in relation to the issue of jurisdiction. By way of explanation, the Commission, supported by some delegations, believes that this is an area in which it has exclusive jurisdiction, while the majority of delegations consider that this is a shared jurisdiction. Several MEPs regretted blocking this dossier in the Council.

The Luxembourg Presidency is ready to begin discussions on copyright reform once the European Commission has presented its proposals, Etienne Schneider further indicated.

Another topic discussed during the debate was the proposal for a new form of single member limited liability company (SMLLC) which aims to reduce costs, notably through online registration. While an MP has warned against the risk of tax evasion, Félix Braz has decided that "the EU needs an instrument of this type". Only 2 to 3% of small and medium-sized enterprises would be active on the single market, therefore beyond borders, he regretted.