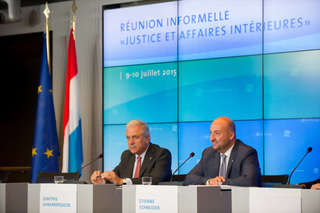 The informal meeting of the Ministers for Justice and Home Affairs (JHA), which was held in Luxembourg on July 9, dealt with matters related to internal security, namely the fight against terrorism, cyberterrorism and cybersecurity. During the press conference that followed the meeting, the Luxembourg Minister of Internal Security, Etienne Schneider, who chaired the meeting, also listed the Presidency's security priorities. He is convinced that if internal security remains the responsibility of the Member States, "the European Union is able to bring added value to the matter".

Priorities of the Luxembourg Presidency regarding security

Over the next six months, the Luxembourg Presidency will focus on the fight against terrorism, ensuring the continued implementation of the measures set out in the statement by European leaders who met on 12 February 2015 in an informal Council, in an attempt to "respect human rights, fundamental freedoms and the principle of proportionality", stated Etienne Schneider. The fight against organised crime will constitute another priority. The aim is to ensure the implementation of the renewed Internal Security Strategy, by "working hand-in-hand with the European Commission, taking into account the European Parliament's contribution and by implicating the Member States and specialised agencies", the Minister indicated.

The Presidency's goal will also be to "complete the top-priority legislative dossiers", particularly the new Europol regulations, for which trilogue discussions are currently being held, the Minister indicated, and the PNR Directive (Passenger Name Record), which will be put to vote by the European Parliament's LIBE Committee (Civil Liberties, Justice and Home Affairs) on 15 July 2015. Etienne Schneider also announced that he will meet with the President of the LIBE Committee, Claude Moraes, with a view to discussing the subject during a bi-lateral interview in the afternoon of 9 July.

The fight against terrorism 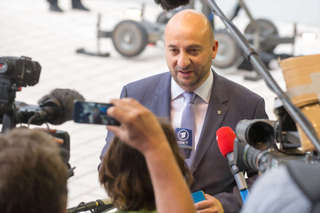 The Ministers discussed the fight against terrorism during a session held in a "restricted form given the sensitivity of the subject", explained Etienne Schneider, who therefore was not able to reveal too many details about the content of the discussions. The representatives of the CTG (Counter Terrorism Group), comprising the intelligence services of the EU Member States, presented their organisation and modus operandi to the Ministers, Etienne Schneider indicated, which called for the need to "fully mobilise this institution in the fight against terrorism". The Minister also pleaded the case for tighter collaboration with the intelligence services and European agencies. "Exchanges of information should be up to what we want to fight", he pointed out.

Responding to a question from a journalist concerning the future adaptation of the Schengen system, Etienne Schneider pointed out that "Schengen should not be called into question", for this would mean that "those who wanted to reduce freedoms would have achieved their goal". In his view, "there should be other ways to guarantee security".

Commissioner Dimitris Avamopoulos, in charge of Migration, Home Affairs and Citizenship, in turn pointed to the need to "remain vigilant and determined" for "we cannot rule out new threats and terrorist attacks".

The second working session of the informal meeting was devoted to cyberterrorism and cybersecurity. In this context, the Ministers received Patrick Ky, Executive Director of the European Aviation Safety Agency (EASA), who tackled the topic of cybersecurity in civil aviation. "The threat is ever present and it would require greater collaboration and sharing of information between civil aviation authorities", Etienne Schneider pointed out, reporting comments by Patrick Ky.

Luxembourg experts in the field of IT security also intervened and pointed out the vulnerability of certain internet sites and IT networks. "The purpose of this presentation was to underscore the importance of raising awareness amongst key players, of prevention in this field and the need for effective cooperation between competent authorities, notably the Computer Emergency Response Teams (CERT)", with a view to ensuring "the protection of our citizens' and companies' data against an ever present threat", the Minister pointed out.

Commissioner Avamopoulos stressed that cybercrime was one of the main priorities on the European Commission's renewed European Agenda on Security.

In conclusion, Etienne Schneider pointed out that the European Union must "provide a united and firm response" in the fight against terrorism, "by fully respecting all the fundamental principles of freedom and proportionality", even if internal security is the responsibility of the Member States. Furthermore, the Minister concluded that solid preventive measures together with information and training are necessary, in light of the constant development of IT which renders our systems vulnerable.