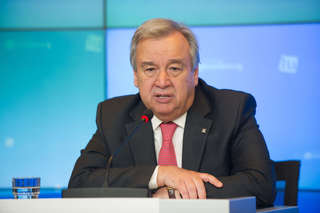 António Guterres, United Nations High Commissioner for Refugees (HCR), has asked Europe to give a "robust response" to the refugee crisis. He called on the EU Member States to develop "effective mechanisms" for showing solidarity, and to fully assume their responsibilities. He delivered his statement at a press conference in Luxembourg ahead of the first day of the informal meeting of Ministers of Justice and Home Affairs (JHA), who had gathered primarily to discuss the issues of immigration and the distribution of refugees. He said he regretted that the European Council of 25 June 2015 had opted for a voluntary approach to the distribution of 40,000 Syrian and Eritrean refugees within the EU, rather than a mandatory approach put forward by the European Commission.

António Guterres urged the EU to facilitate legal entry channels to the EU, increase the number of resettlement places, make visa policies more flexible, facilitate family reunification and step up the fight against smuggling. He also forecast a "drastic increase" in refugee arrivals in the coming months.

He stressed that the number of Syrian refugees in countries neighbouring Syria is over 4 million. The majority of Syrian refugees have been taken in by Turkey (1.8 million) and Lebanon (1.17 million), amounting to over a quarter of the country's population, as stated on the HCR website.

The High Commissioner explained that the route taken by refugees has shifted towards the east of the Mediterranean, with nearly 78,000 refugees having arrived in Greece since the beginning of the year (compared with 43,500 in 2014), while Italy has had 67,500 arrivals. In total, 137,000 immigrants arrived in Europe in the first half of 2015, according to the HCR.

85% of the refugees arriving in Greece come from conflict-ridden countries, and 65% of them are Syrian, explained António Guterres. He condemned the conditions in which refugees are received in Greece as "poor". "The capacity of Greek society to absorb such a large number of people is almost non-existent", he said. "Nobody should be surprised that refugees move onward out of despair, particularly via the Balkans, Bulgaria and Hungary", he added. He reported on instances of countries in the western Balkans pushing back refugees, and lamented the "gaps" in the refugee protection systems in these countries.

According to the High Commissioner, "It is very worrying that living conditions and the level of protection for Syrians in neighbouring countries are deteriorating rapidly". António Guterres lamented the fact that "the level of assistance provided by the international community is clearly inadequate" and that there is "very little support going to the countries neighbouring Syria". According to the HCR, only a quarter of the USD 5.5 billion requested has reached humanitarian agencies in the neighbouring countries. This has forced these agencies to "drastically reduce food aid". "At the moment, humanitarian agencies are not able to provide the minimum amount of aid that human dignity requires", stressed António Guterres. However, he welcomed the efforts made by Turkey which, he explained, has invested USD 6 billion in direct aid to Syrian refugees in its country.