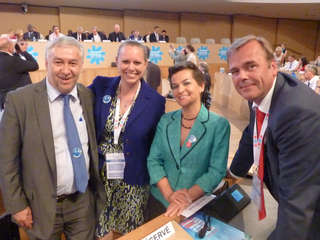 Luxembourg's Minister for the Environment, Carole Dieschbourg, spoke at the World Summit Climate & Territories held in Lyon (France) on 1 and 2 July 2015.

Five months prior to the Paris 2015 Climate Change Conference (COP21), where 196 stakeholders will try to reach a new international agreement on climate with the aim of keeping global warming below 2°C, all the non-state actors (local and regional authorities, NGOs, economic actors, management and trade unions, youth, women, scientists and experts) came together in Lyon. They emphasised the importance of a territorial approach to climate change and put their commitments and proposals to the negotiating States, for integration into an ambitious agreement in Paris.

In her capacity as President of the European Union Environment Council in charge of coordinating the position of the EU for the Paris Conference, Carole Dieschbourg made the closing speech at the Summit. In her first speaking engagement in the framework of the Luxembourg Presidency of the Council of the EU, the Minister stated that it will fall to Luxembourg to " stand with the Commission and defend the European position ". The Minister expressed the view that Europe " is an example " in terms of both commitments and progress. She called for a " robust " European negotiating position, while acknowledging that the agreement will depend on " the contribution of all parties ".

In order to take on the challenges, Carole Dieschbourg reiterated that the agreement will have to be " legally binding, sustainable and dynamic " and will have to target " not only measures to curb climate change, but also adaptation and implementation ". " Clear rules " are what is needed to ensure transparent implementation, she added, and only an agreement signed by all the parties would be " a successful agreement " giving " a strong message to economic actors and regional and local authorities ".

In light of this, the Minister expressed the view that a clear message and commitment must be given regarding monitoring, reporting and inspection measures "to ensure transparency and accountability" among the parties, review cycles "to reach for new levels of ambition" , long-term objectives and financing.

Minister Dieschbourg recognized that " a crucial voice " on the issue of climate change could be heard at the event, and praised the various initiatives presented during the event. Reference was made to the "Under 2 - MoU" project bringing together States and regional authorities wishing to committo reducing their greenhouse gas emissions launched by California and Baden-Wurtemberg, the Covenant of Mayors – a European movement of local and regional authorities with a voluntary commitment to improving energy efficiency and greater use of renewable energy within their territories – and the Climate Pact in Luxembourg bringing together 94 communes out of a total of 105 in the country on a range of measures designed to bring about a sustainable policy.

In this regard, the Minister emphasised again " the crucial role of regions " in turning commitments, which would otherwise remain empty promises, into real action. Carole Dieschbourg pointed out that " the transition will be driven by regions, just as it will be driven by business, and a new and widely held understanding in society " noting that " the solutions are already available; you have demonstrated that today ". The Minister noted that it is now " crucial " to bring these solutions to a wider audience and therefore " show that these changes are feasible and have benefited and will benefit everyone ". This is the true challenge faced by the Lima – Paris Action Plan, led jointly by the Peruvian Presidency of COP20 and the French Presidency of COP21 and designed to facilitate the implementation of the agreement to be negotiated in Paris.